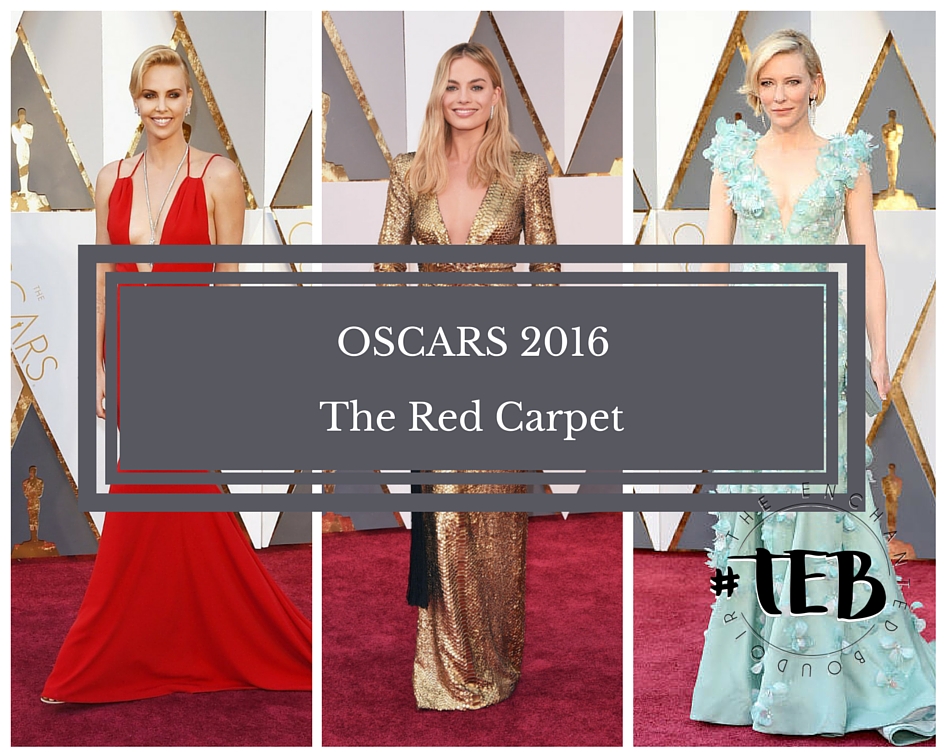 The 88th Academy Awards mark the last stop of our fashion recap for this Awards Season: Who is sad? I am.
Aside the usual lack of diversity among the nominations, the 2016 Oscars will make history for two reasons: firstly as the most important moment in Leonardo DiCaprio‘s life (as #TEB‘s cinema-lover Beatrice previously told you), and secondly for delivering a colorful selection of modern red carpet looks.
But did I fall in love with all of them? Nope.
Let’s have a look:
FLORAL MASTERPIECE
Cate Blanchett (Carol) in Armani Privé / John Legend & wife Chrissy Teigen in Marchesa 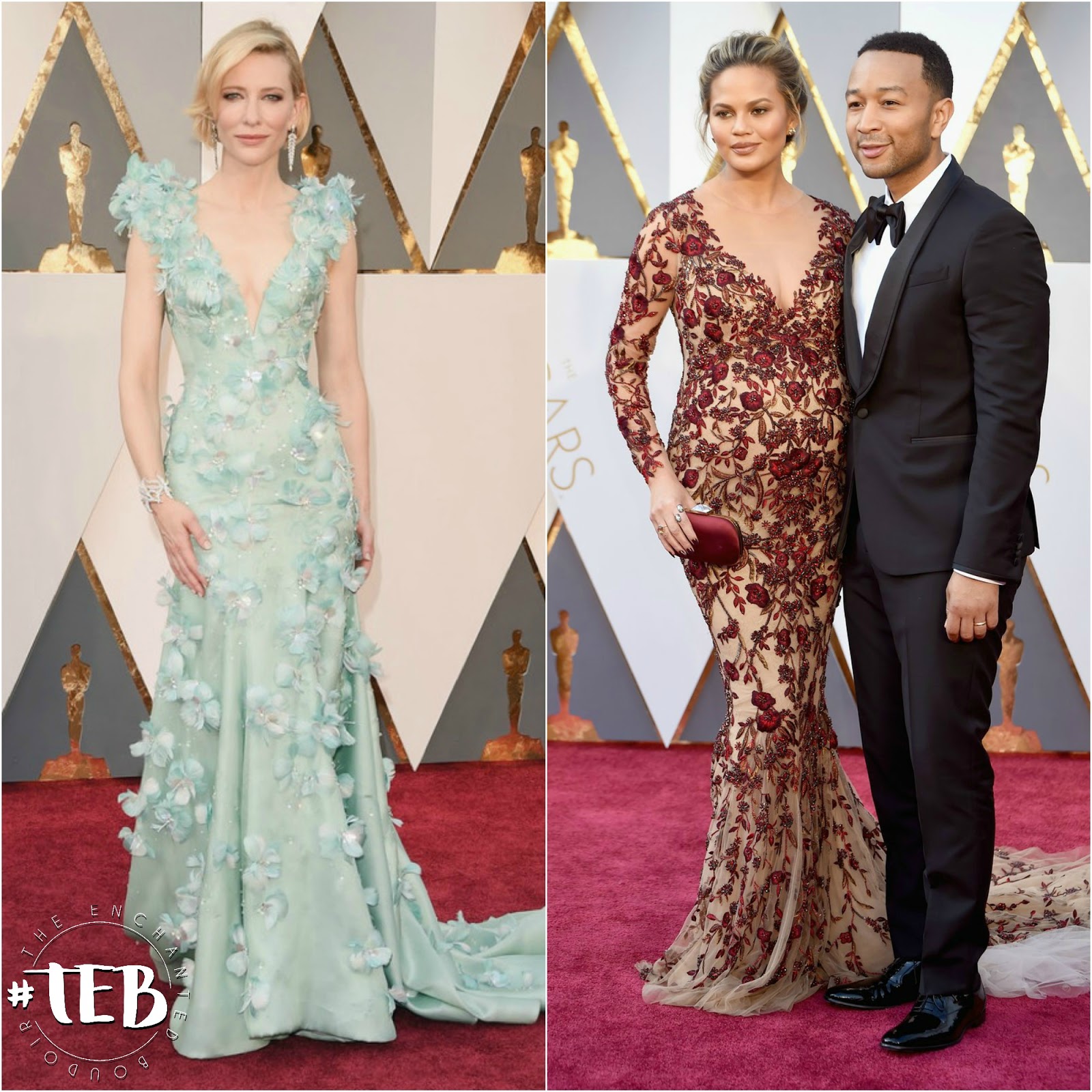 I was expecting Cate Blanchett to wear a couture piece, however I was suprised to see her wearing something this romantic: showstopping tailoring and 3-D flowers’ applications make this Armani Privé gown, one of the best looks of the night.
Moving to the lovely couple on the right, I have to repeat myself: Chrissy Teigen has the best maternity style ever. The design is nothing new, but Marchesa managed to adapt it to her new body: the expected sensuality of the design is casted away, to favor a look that oozes feminine beauty at its fines. I am in love witn this.
BOLD COLORS
Brie Larson (Room) in Gucci / Charlize Theron in Dior / Olivia Munn in Stella McCartney 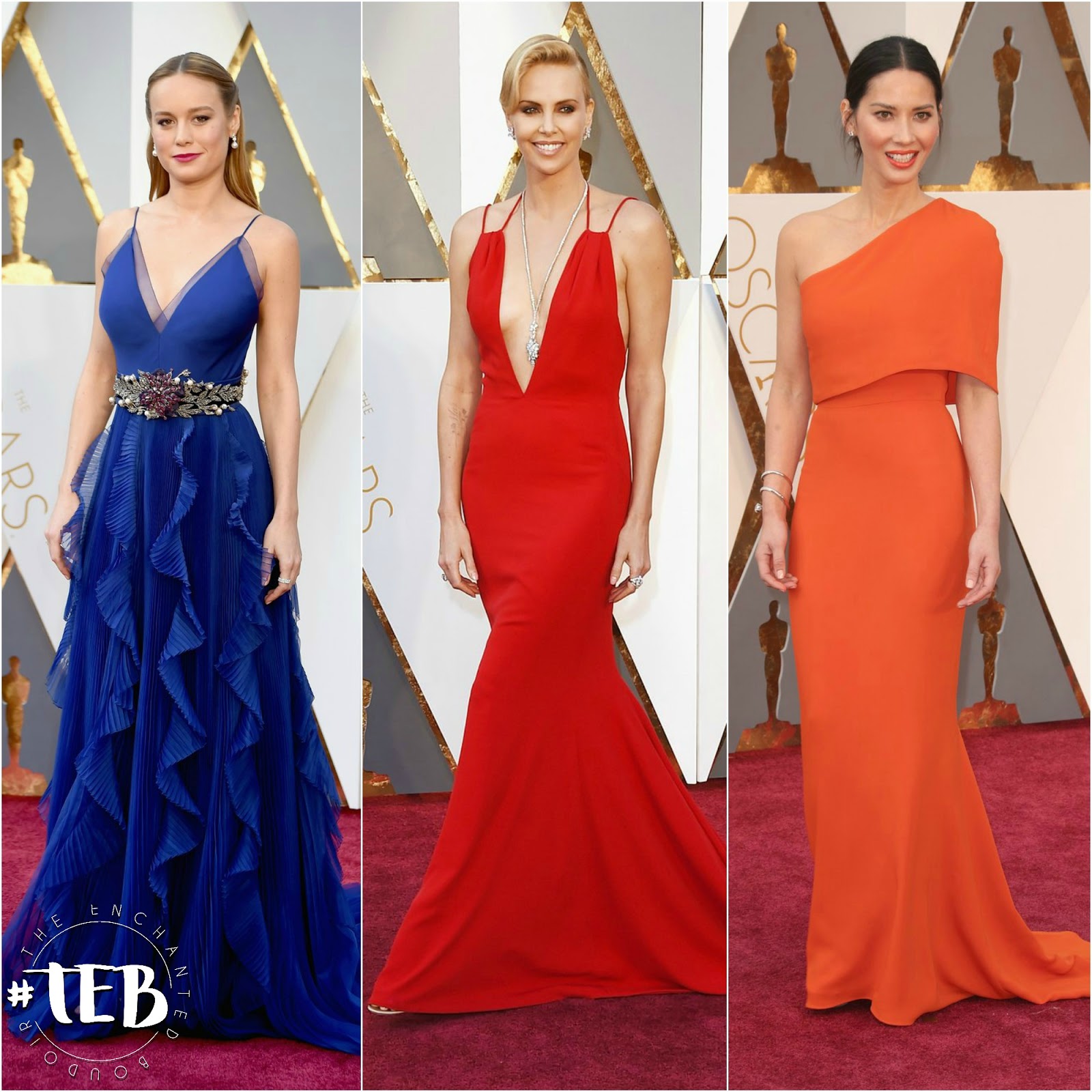 A better title should have been “Saved by the color”.
Brie Larson had an impressive awards season, thanks to her performance in Room, but also to her stylist. However I can not say that this Gucci is the best look she came up with or even Oscars-worthy material…but at the end of the day isn’t she beautiful in that shade of blue?
Charlize Theron wore of course a design by Dior: from the waist down I am a fan, but the upper part is questionable. It feels like a bathing suit turned into a evening gown…but isn’t she beautiful in that shade of red?
Olivia Munn is not really an A-list celebrity, however this Stella McCartney‘s orange gown makes her look the part.
INTERESTING SHAPES
Lady Gaga in Brandon Maxwell / Olivia Wilde in Valentino Haute Couture 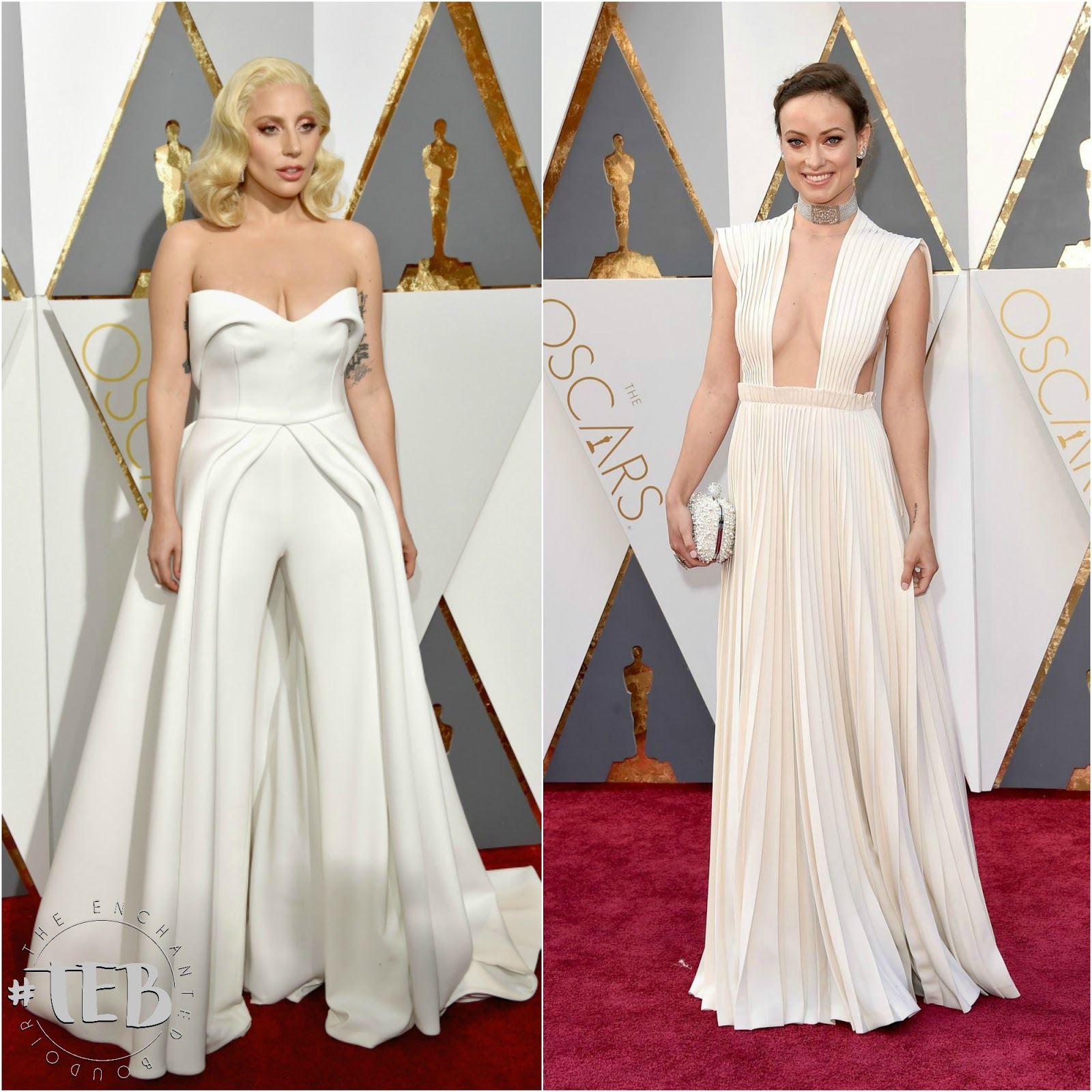 Lady Gaga and Brandon Maxwell are a match made in heaven. This jumpsuit is everything: elegant, modern and luxurious; definitely the most unforgettable look of the night.
Olivia Wilde played the couture card in a revealing Valentino dress: I like it, maybe too much for the Oscars, but that chocker is throwing me off. #Unnecessary.
LUXURY by CHANEL
Julianne Moore in Chanel Couture / Daisy Ridley (Star Wars: The Force Awakens) in Chanel Couture 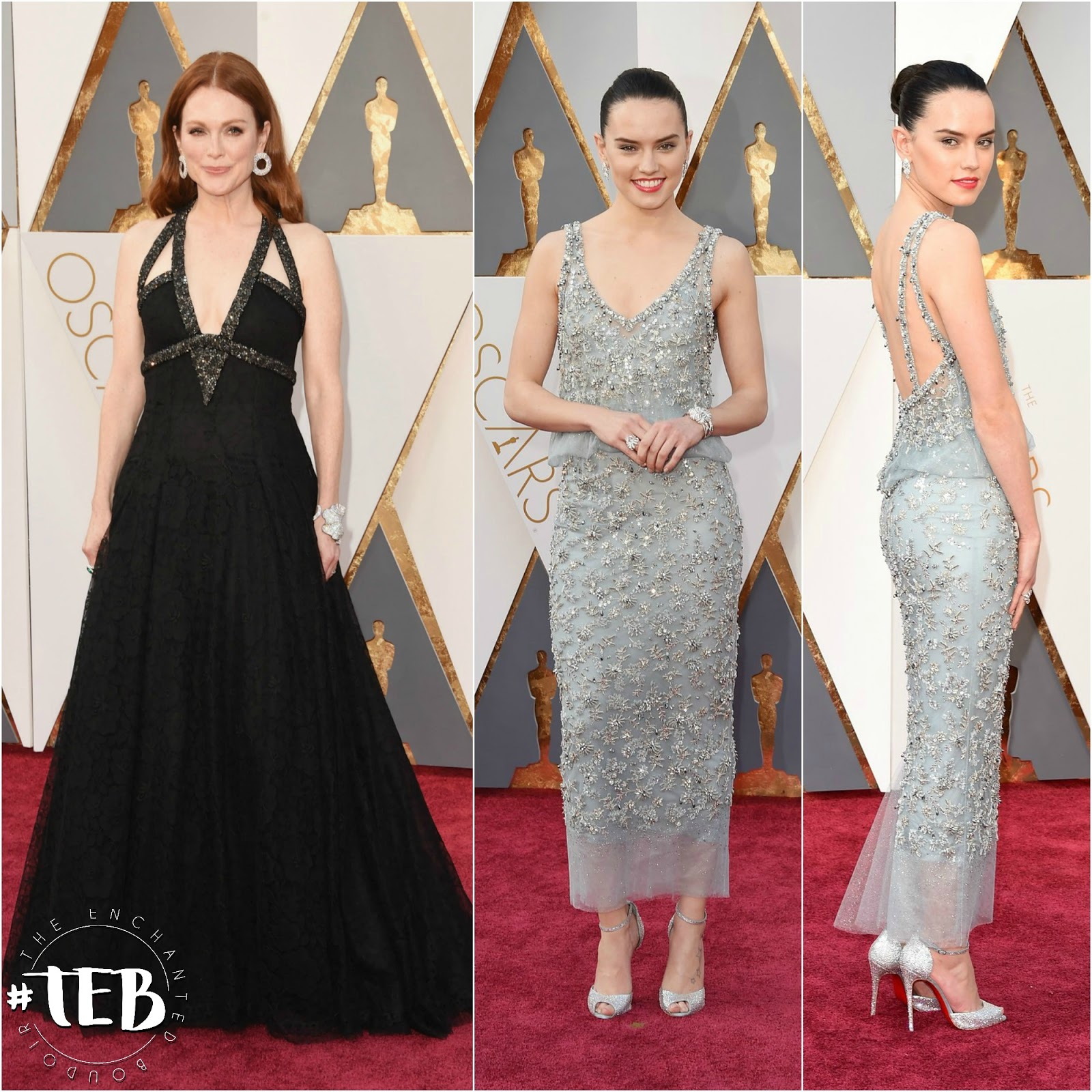 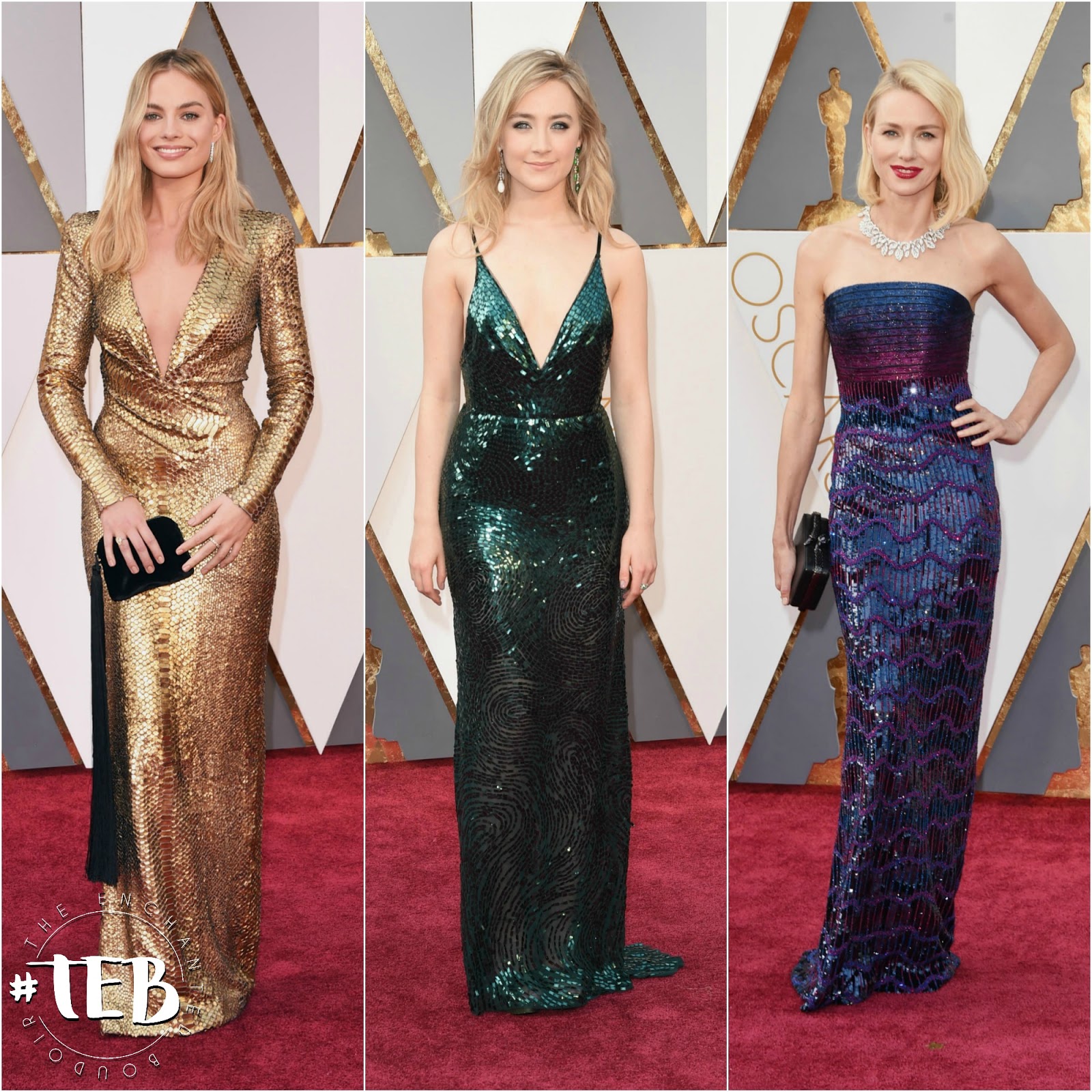 Get your sunglasses on, it’s getting shiny right here!
Margot Robbie took the Oscars theme kind of literally, by wearing a golden Tom Ford piece: I like the outfit, but I am not sure about the hair, maybe too casual for the occasion.
Brooklyn star Saoirse Ronan chose a sexy Calvin Klein dress for her debut on the Academy Awards’ red carpet, however the styling makes her look older than her 20s.
Naomi Watts managed to over-accessorize her look one more time: if you have to wear Bulgari jewels by contract, why choosing such a dress?
YOU LOVE IT, I HATE IT #1
Alicia Vikander (The Danish Girl /Ex-Machina) in Louis Vuitton 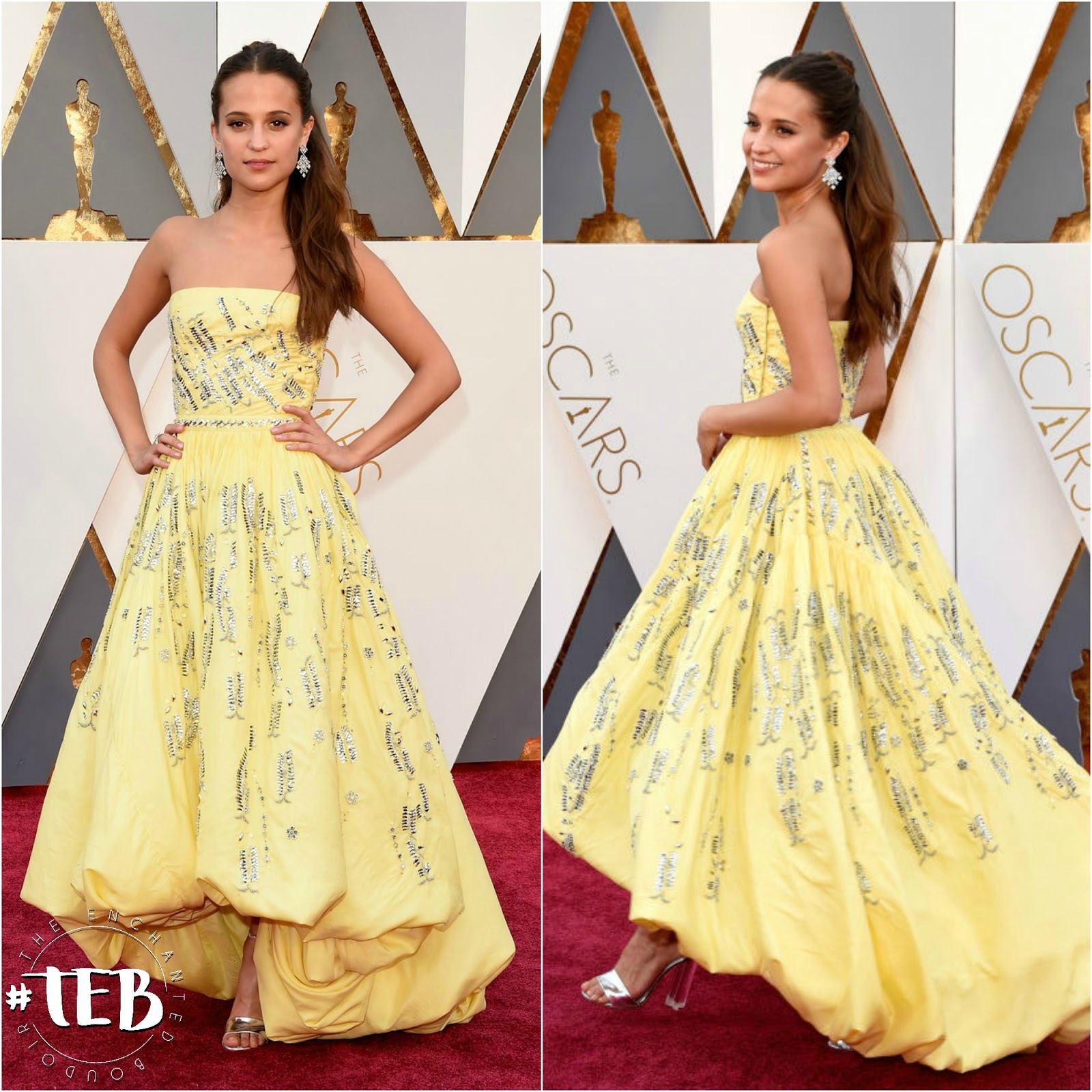 I like Alicia Vikander as an actress and her beauty is undeniable, but I can not get on board with this mess. Being Louis Vuitton ambassador she might had no voice in the selection of her outfits, so I forgive her, but it hurts me anyway to hate this look so much: she has been on #TEB‘s best dressed list for the entire awards season. #Pity.
YOU LOVE IT, I HATE IT #2
Kerry Washington (Scandal) in Atelier Versace / Jennifer Lawrence (Joy) in Dior 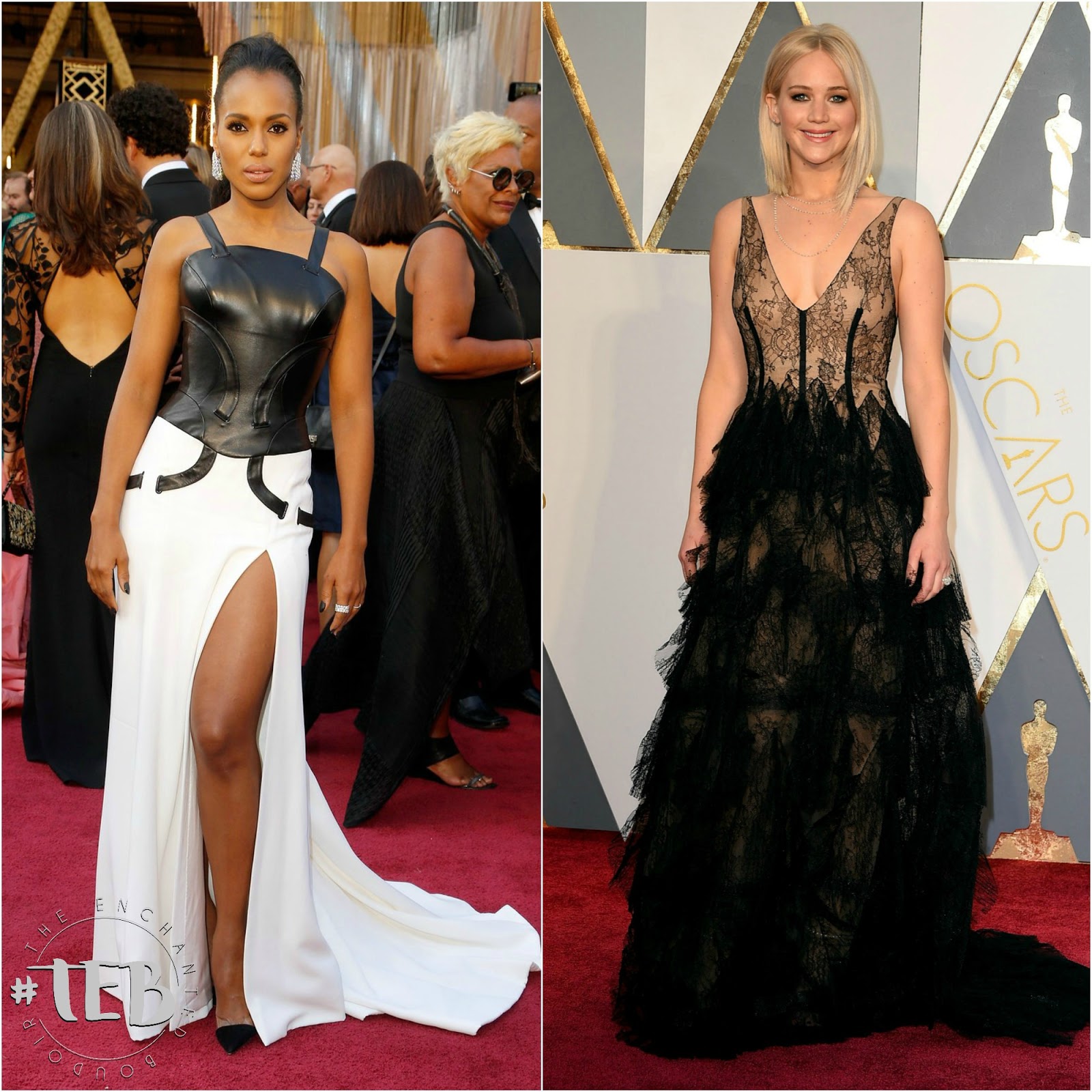 If you can see Kerry Washington‘s Versace look as a one-piece, then you will feel the boldness of the design. If you can not, than you would agree with me: what the hell is she wearing?
Jennifer Lawrence finally found the perfect hair color to enhance her natural beauty; I wish I could say the same about that lace-fest Dior gown.
PLAYING SAFE
Sophie Turner (Game of Thones) in Galvan for Opening Ceremony x Swarovski / Rooney Mara (Carol) in Givenchy / Emily Blunt (Sicario) in Prada 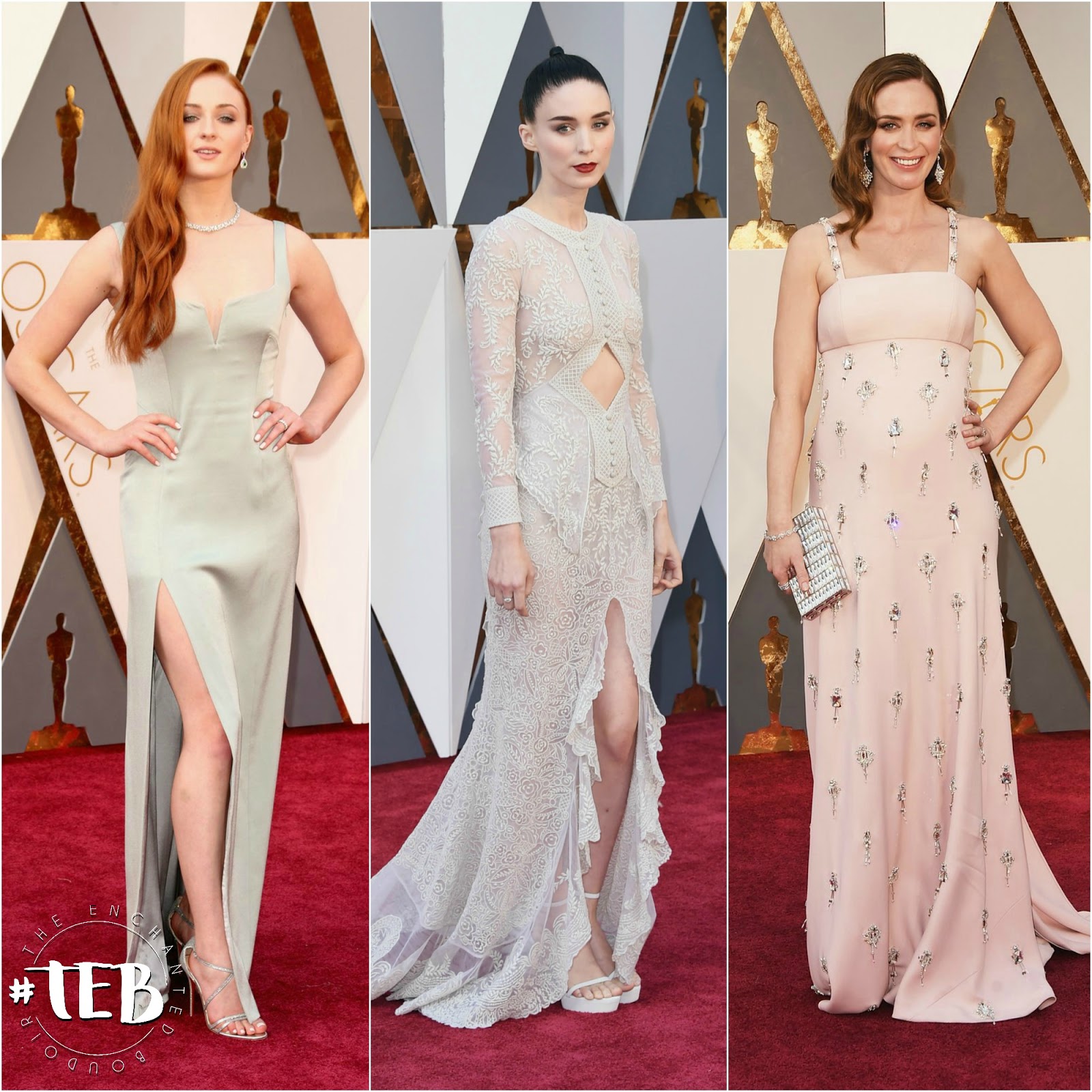 Sophie Turner looked divine: the ginger Game of Thrones star finally nailed the look I have always dreamed for her, although a darker color would have turned this look into a showstopper.
Rooney Mara in Givenchy is getting boring, especially if you keep wearing little variations of the same design over and over again.
Emily Blunt looked just like the lovely mum she will become: however the dress by itself is nothing special.
ELEGANT EMEBELLISHMENTS
Amy Poehler in Andrew Gn/ Jennifer Garner in Atelier Versace/ Sofia Vergara (Modern Family) in Marchesa 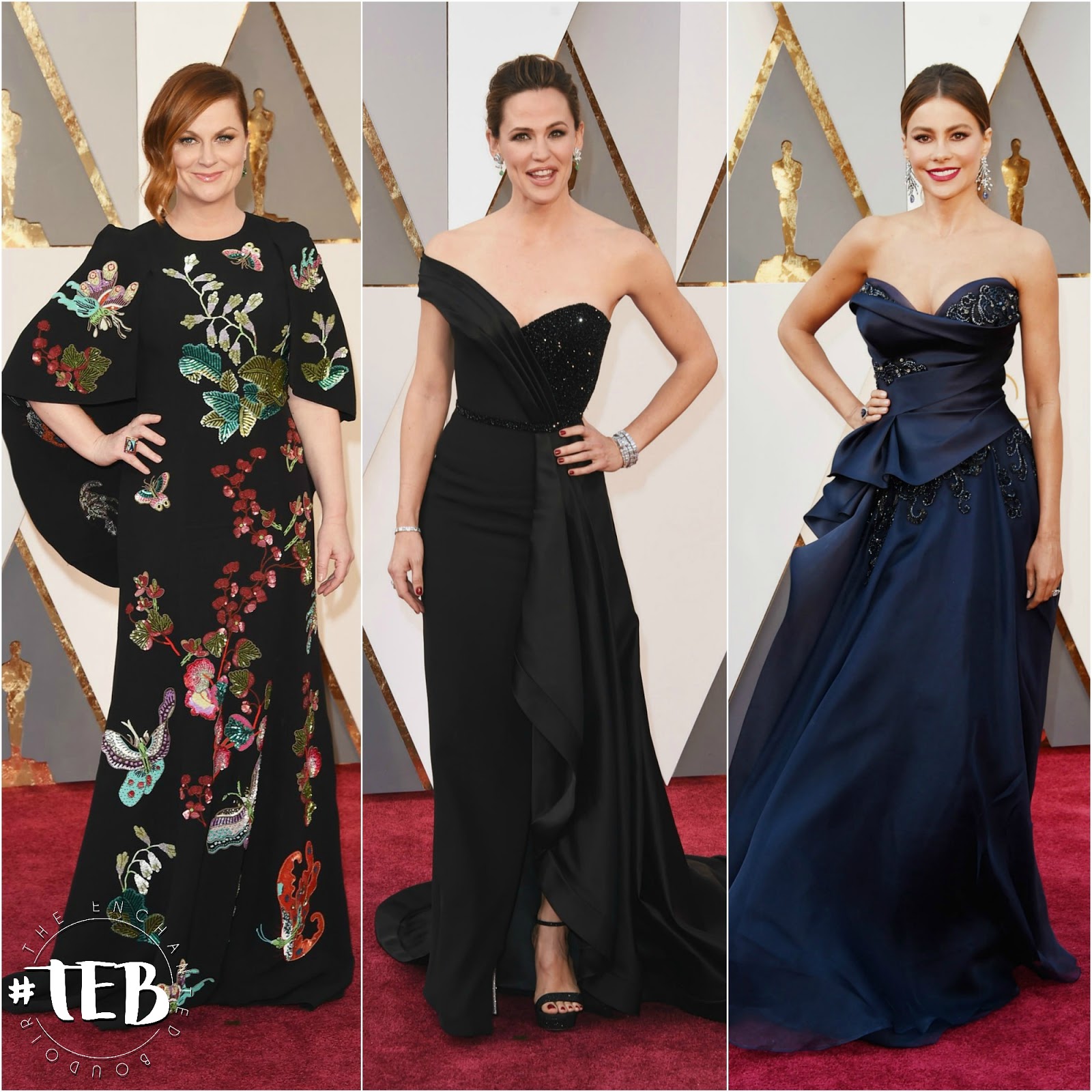 Nature-inspired embroidery on Amy Poehler gown, definitely an original choice for the Oscars, while both Jennifer Garner and Sofia Vergara went for something more classic but sparkling. Jennifer proved that Versace can still deliver good and classy gowns, and Sophia surpised me stepping out of her comfort zone, by wearing something different from her usual mermaid dresses.
LAME CHOICE #1
Priyanka Chopra (Quantico) in Zuhair Murad / Isla Fisher in Marchesa / Rachel McAdams (Spotlight) in August Getty Atelier 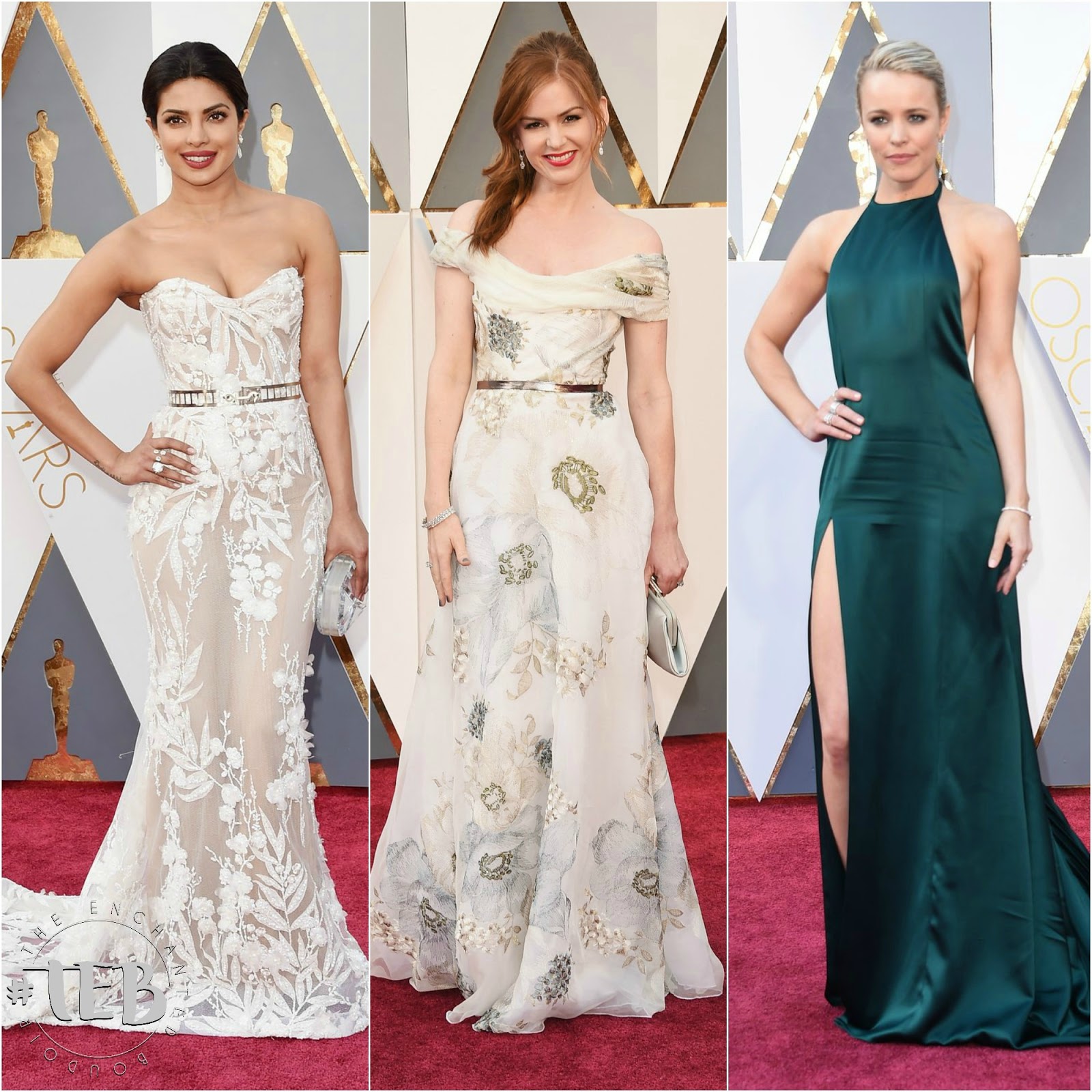 I love this section: how is it possible to go wrong having a styling team and the star-power to wear beautiful designer clothes? Watch and learn.
–Priyanka Chopra in a beautiful white gown…do you get the bridal vibe once again?
–Isla Fisher‘s gown is so plain that I do not want to wast time commenting.
– and Rachel McAdams is such a let down: this gown has no life or style. Why wearing it to the Oscars??
LAME CHOICE #2
Heidi Klum in Marchesa / Reese Witherspoon in Oscar de la Renta / Kate Winslet in Ralph Lauren 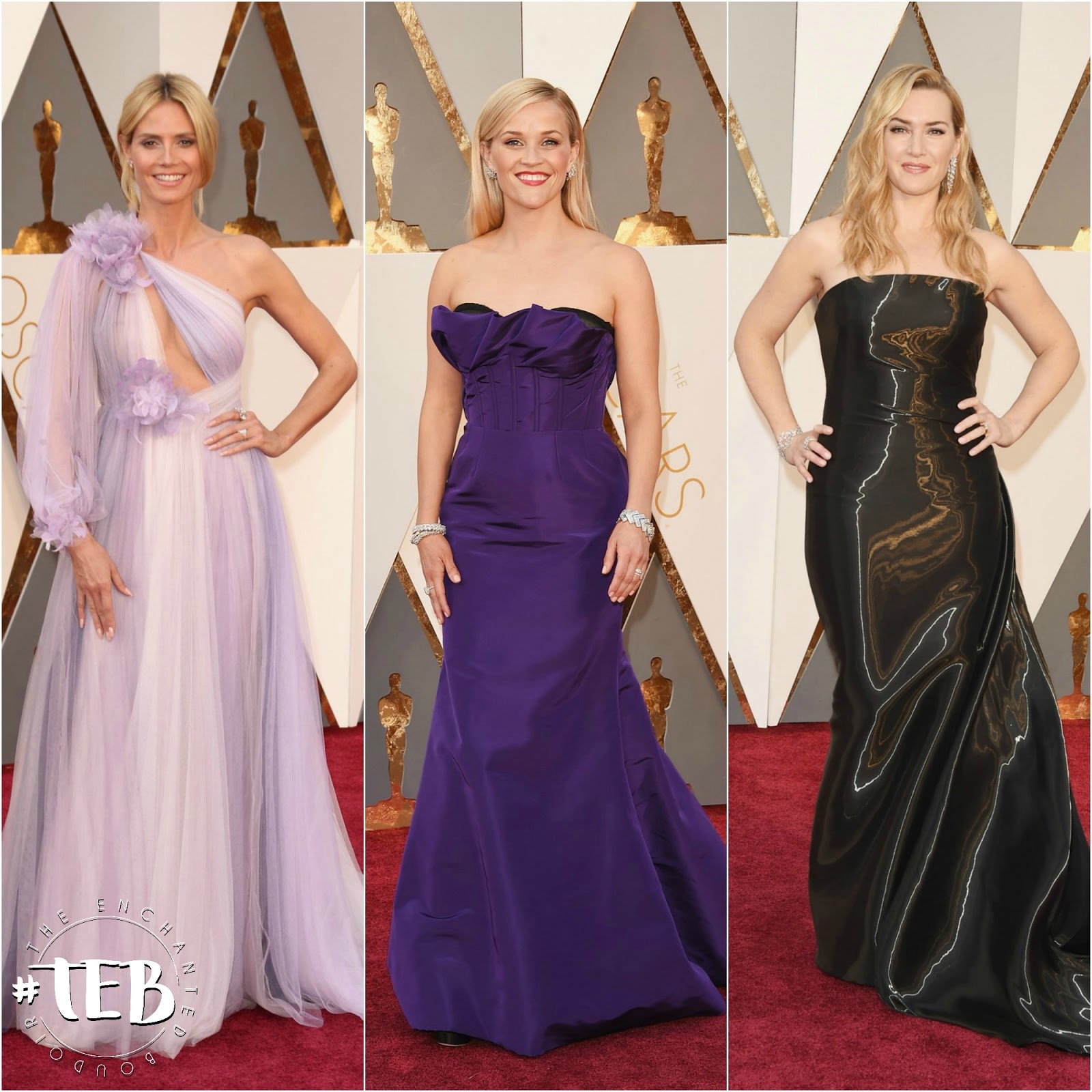 Everyone has his own tradition…mine is to find Heidi Klum among the least convincing looks on the red carpet: this time she has to blame a costumy and fluffy Marchesa design. Next.
Would you wear a dress that does nothing for your boobs? According to Reese Witherspoon, yes.
Last but not least Kate Winslet in what I call “Futuristic Garbage“.

That’s the Oscars everybody.