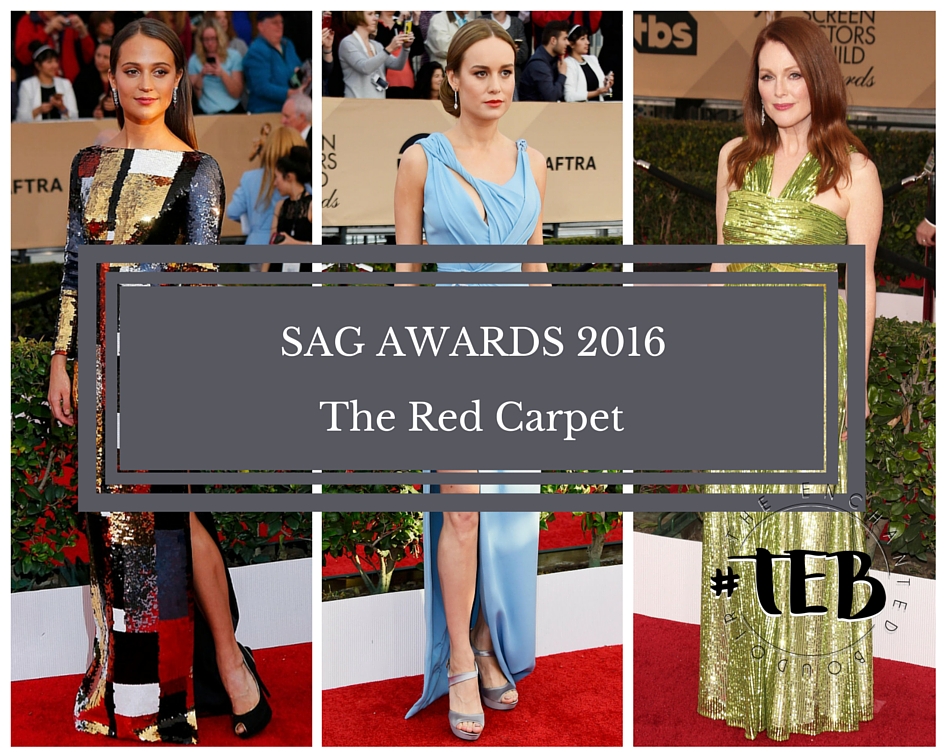 The SAG Awards are the second key moment of this awards season, and style-wise a warm-up between the Globes and the Oscars. As the winners of the night rehearse their speeches for their big time at the Oscars, let’s have a look at the best (and worst) fashion moments of the night:
STAR OF THE SHOW
Alicia Vikander (The Danish Girl/Ex-Machina) in Louis Vuitton 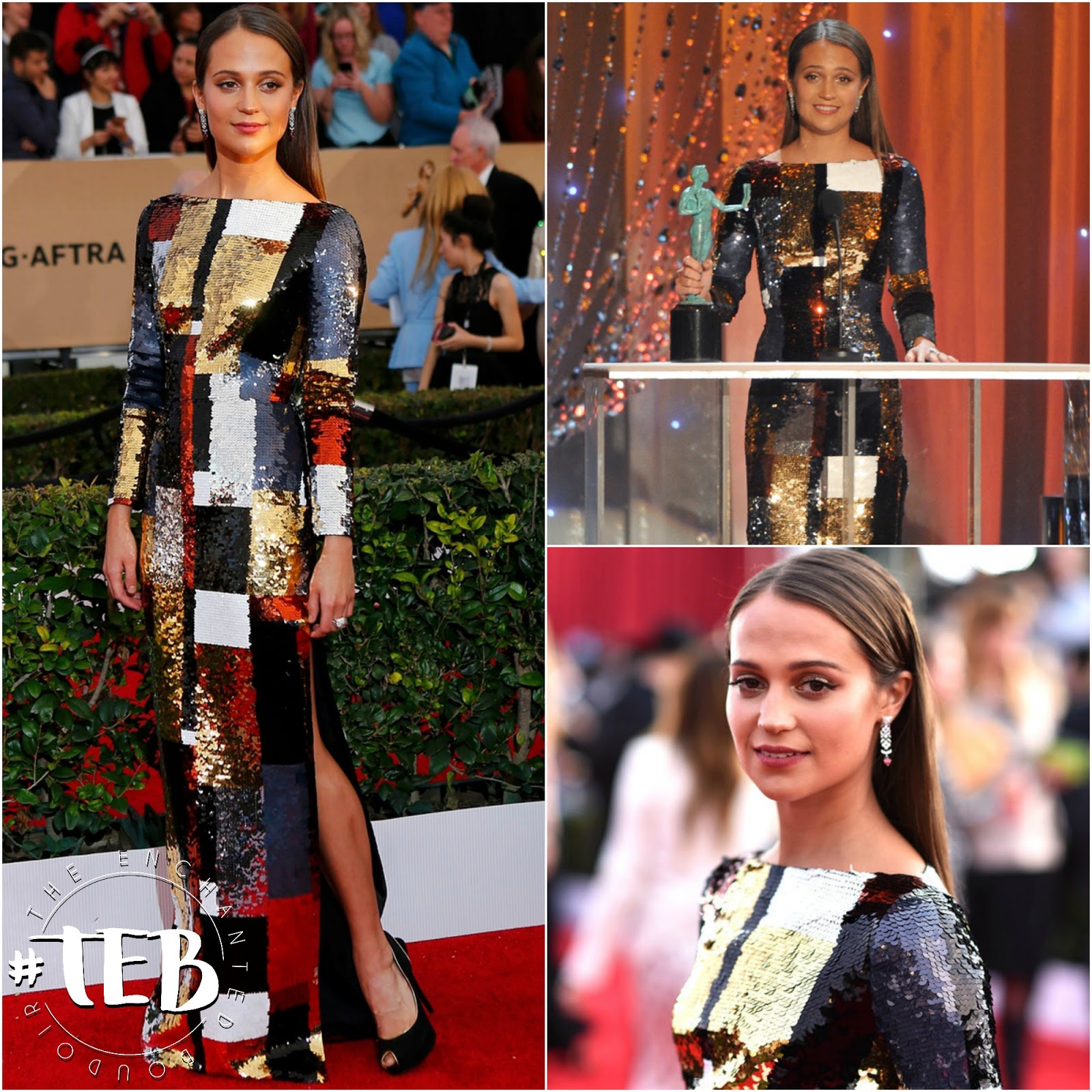 Bow down to the most beautiful Louis Vuitton dress I have ever seen on a red carpet: simple in the design and dazzling in the details. Swedish actress Alicia Vikander definitely looked like the star she will become. Best look of the night.
BREATH-TAKING
Viola Davis (How To Get Away With Murder) in Zac Posen_Brie Larson (Room) in Atelier Versace Couture 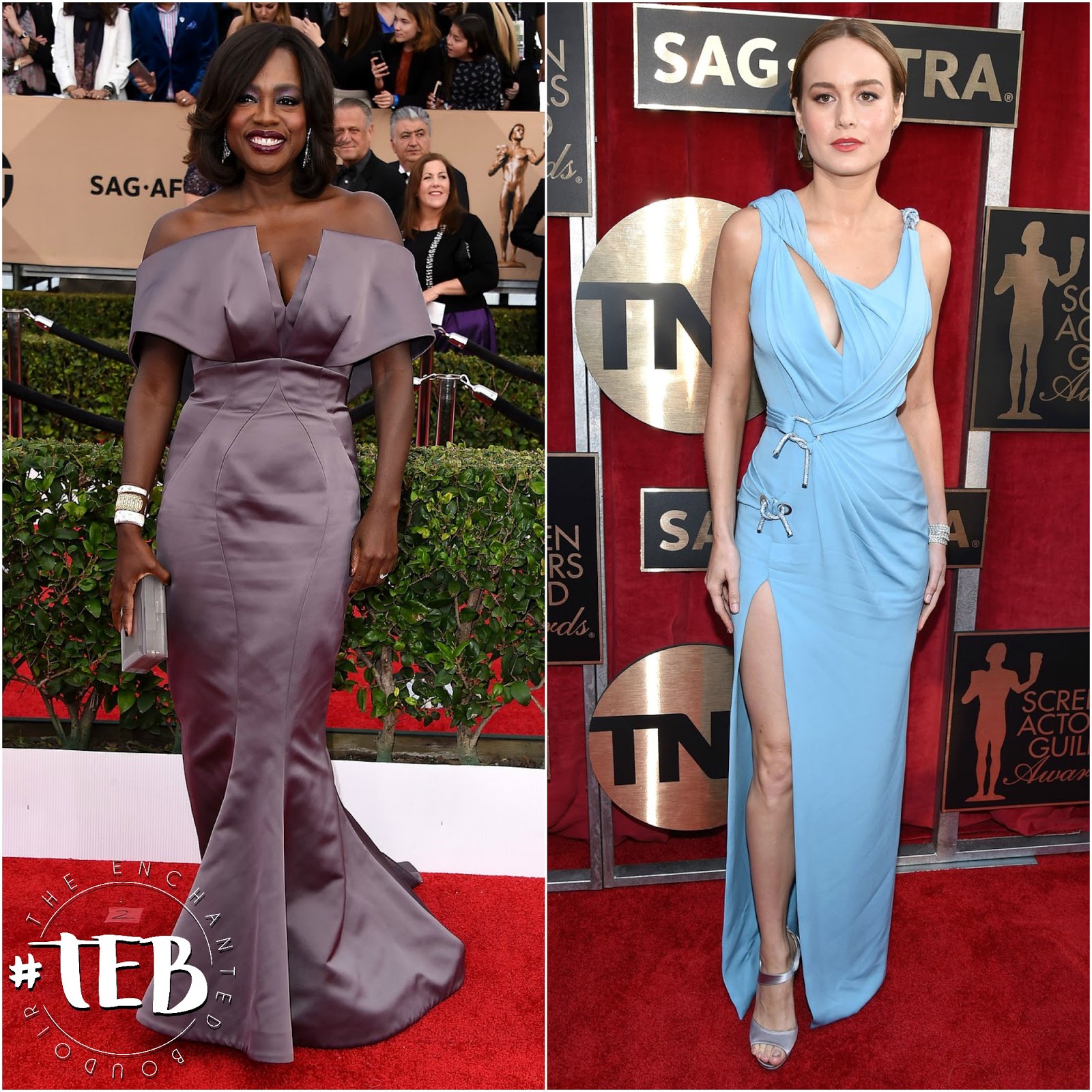 As I always say, “you can never go wrong with a Zac Posen‘s design” and Viola Devis is another proof of that: the color of the dress is amazing on her skin, the feminine shape on the gown enhanced her figure and that smile..well that was the cherry on top! Actress of the year Brie Larson got the couture treatment directly from Atelier Versace, as she wore a couture piece straight from the house’s spring 2016 couture collection. The dress proved to have “red carpet” potential on the runway, and I am glad to see how beautiful it looks on Brie. My only side note has to be the shoes: WTF???
SISTERLY LOVE
Kate Mara in Valentino_Rooney Mara in Valentino 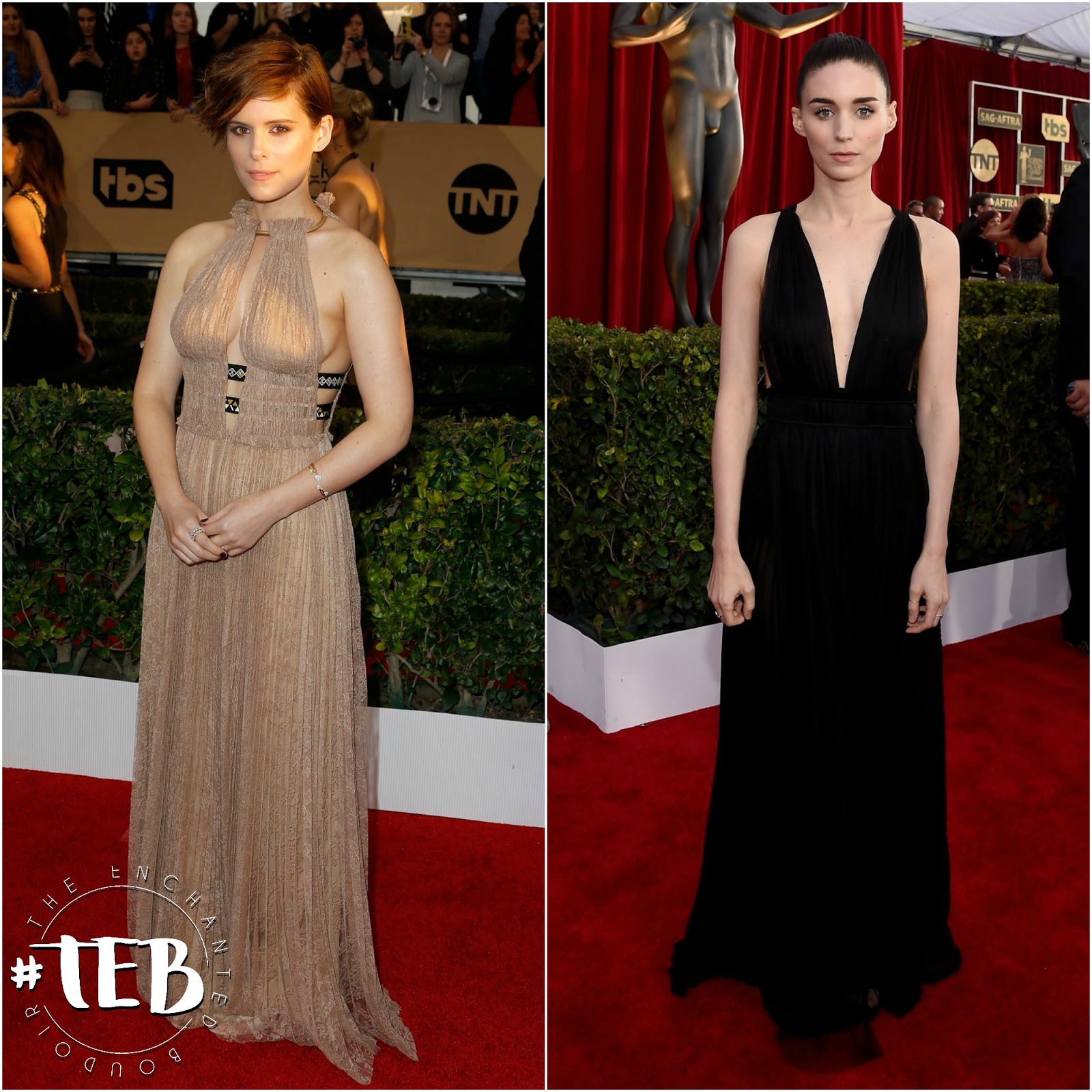 The Mara sisters had a Valentino moment on the red carpet. Kate Mara wore a piece from the spring summer 2016 collection, while Rooney Mara opted for a couture piece from the fall winter collection. Same designer, different interpretations: I have to say that Rooney looked regal (even if I wanted to see some major jewellery piece with that gown), while Kate definitely brought some sensuality to her dress.
SHOCKING PINK
Emilia Clarke (Game Of Thrones) in Dior_Sofia Vergara (Modern Family) in Vera Wang 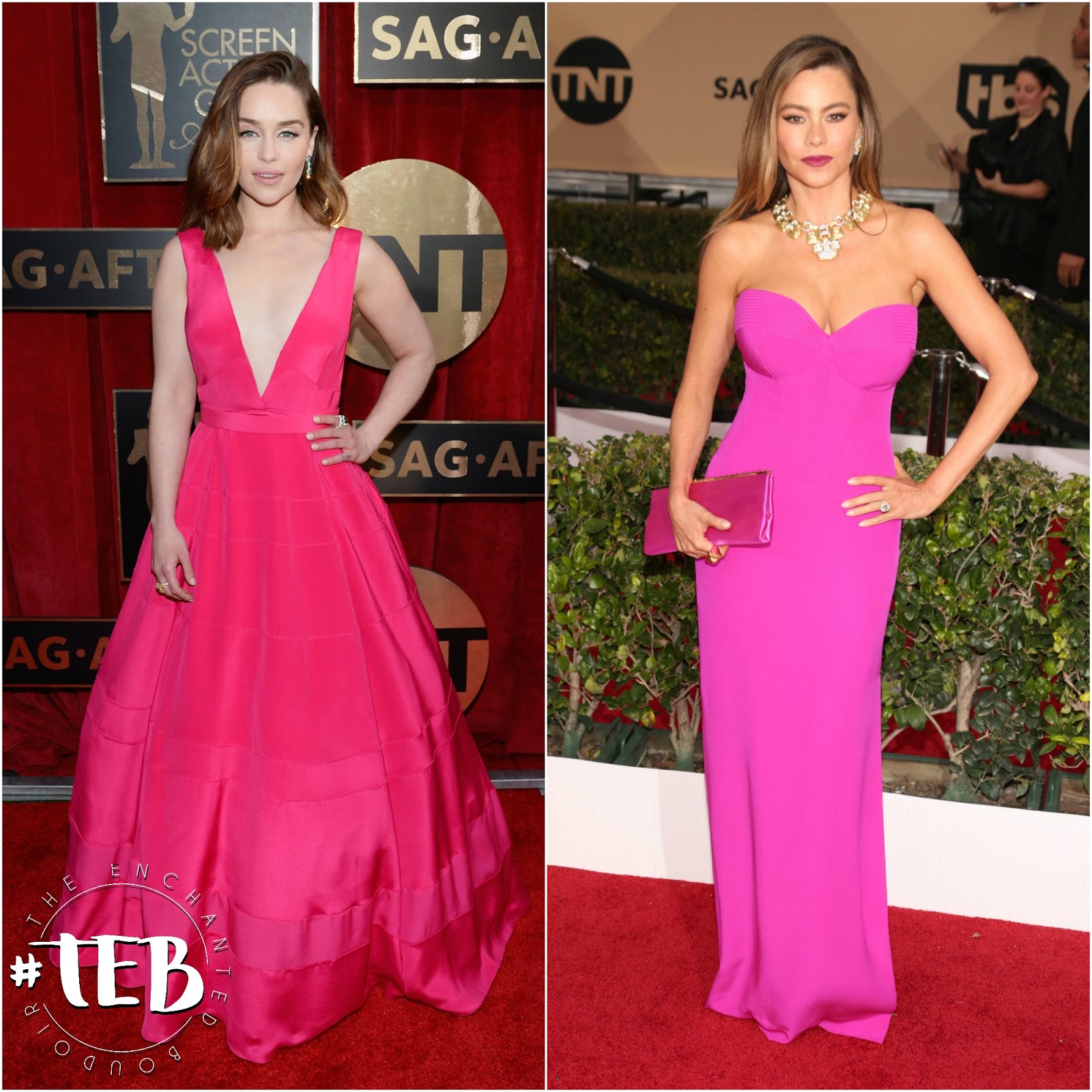 Only the brave. Emilia Clarke wore the second decent Dior design of this year awards season, while Sofia Vergara (as always) favored a mermaid-like dress: the designs were not original, but the color sealed the deal.
THE MICHAEL’S ANGELS
Saoirse Ronan (Brooklyn) in Michael Kors_Queen Latifah (Bessie) in Michael Costello 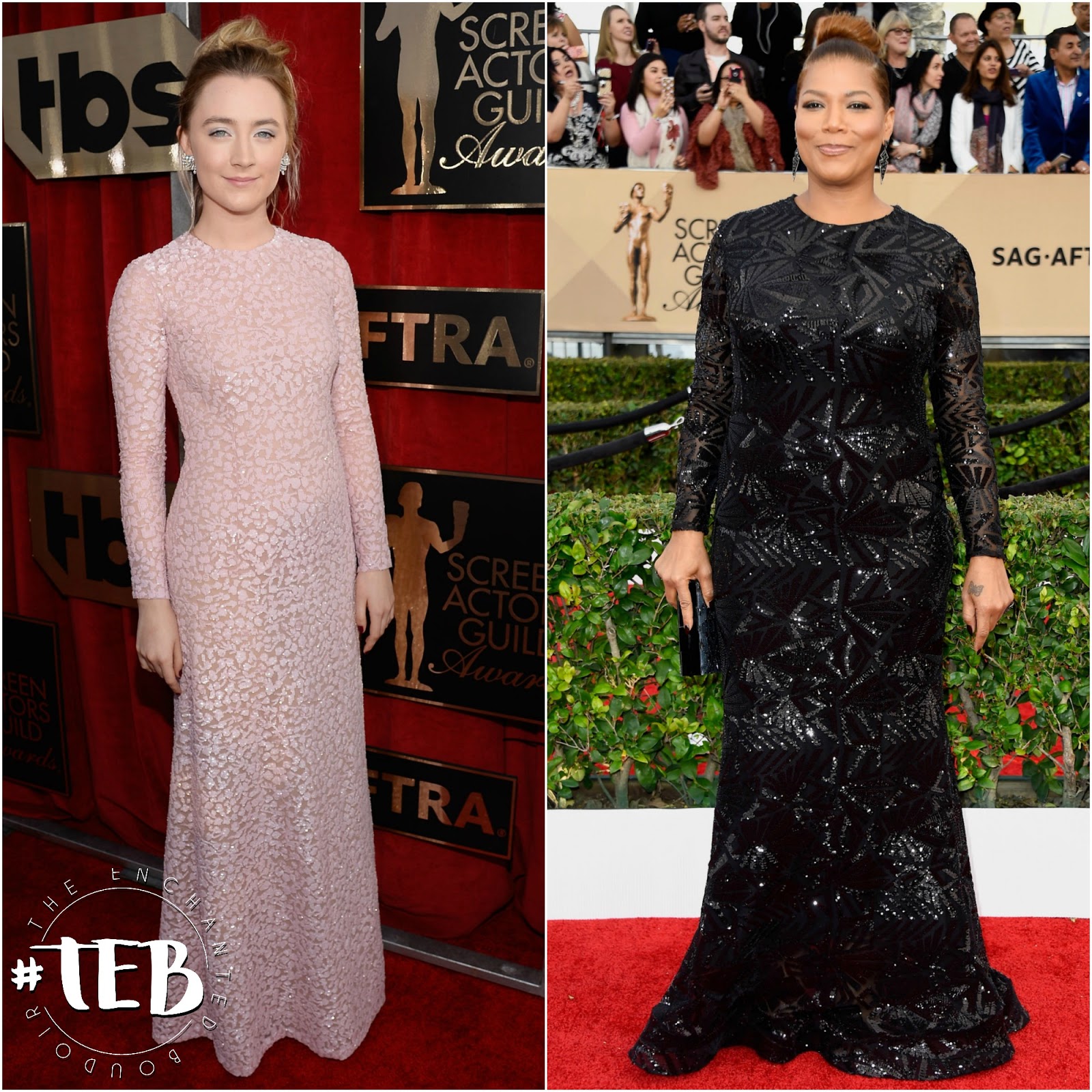 Ok, let’s forget the bad title-joke. But I have to admit that Michael Kors and Michael Costello gifted Saoirse Ronan and Queen Latifah with two beautiful elegant and timeless dresses. In both cases the styling was kept to the minimum, I could not agree more.
EYE-CATCHING TOPS
Sarah Paulson (ASH: Hotel) in Armani Privé couture_Kristen Wiig (The Martian) in Roland Mouret 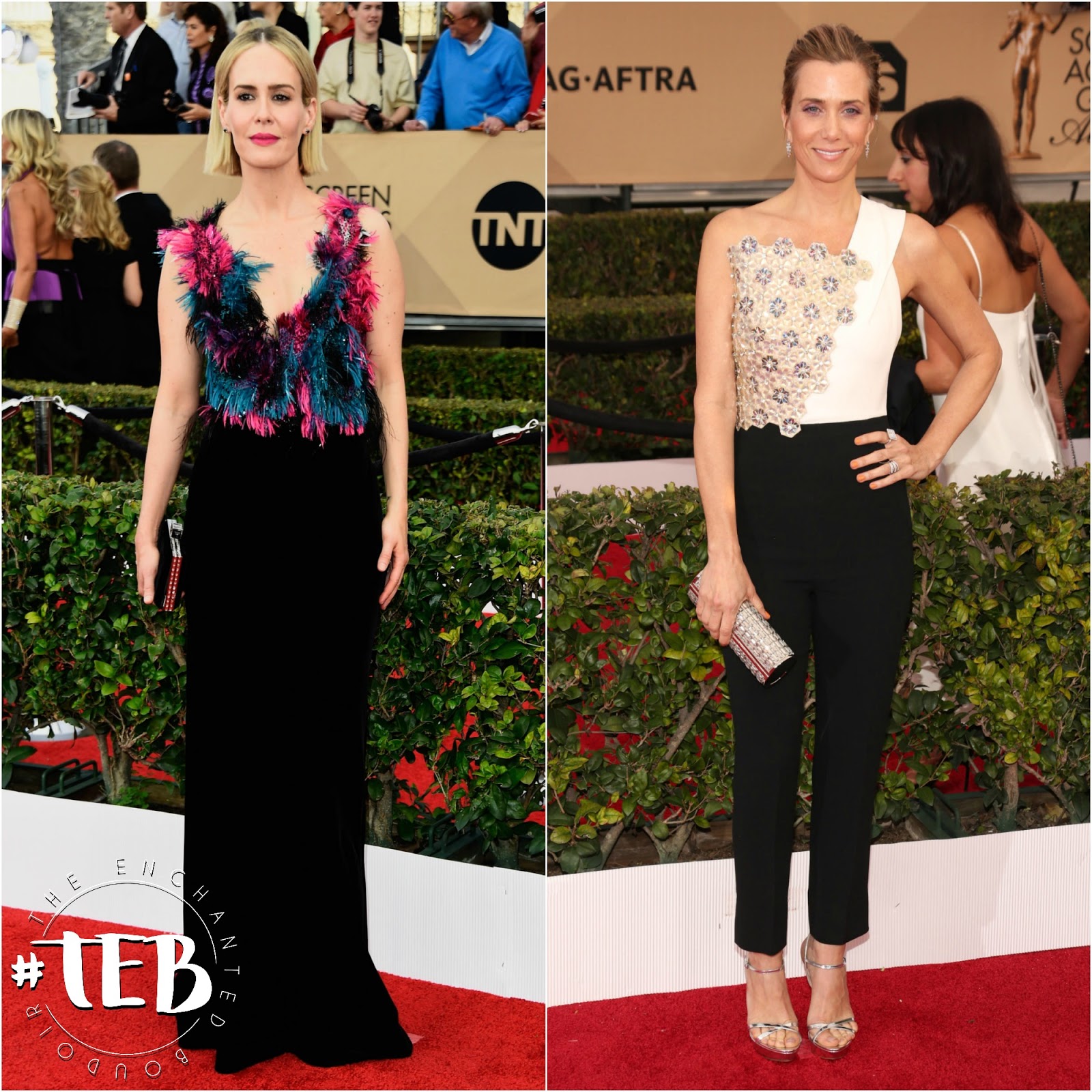 Couture make over also for Sarah Paulson, who turned to Armani to find the perfect dress for the evening. Usually I am not a fan of her on the red carpet, but this time I love the injection of color. Kristen Wiig brought back my love for jumpsuits, wearing a modern number for Roland Mouret. I would wear it in a heart-beat.
YOUNG HOLLYWOOD
Maise Williams (Game Of Thrones) in Ermanno Scervino_Sophie Turner (Game Of Thrones) in Carolina Herrera 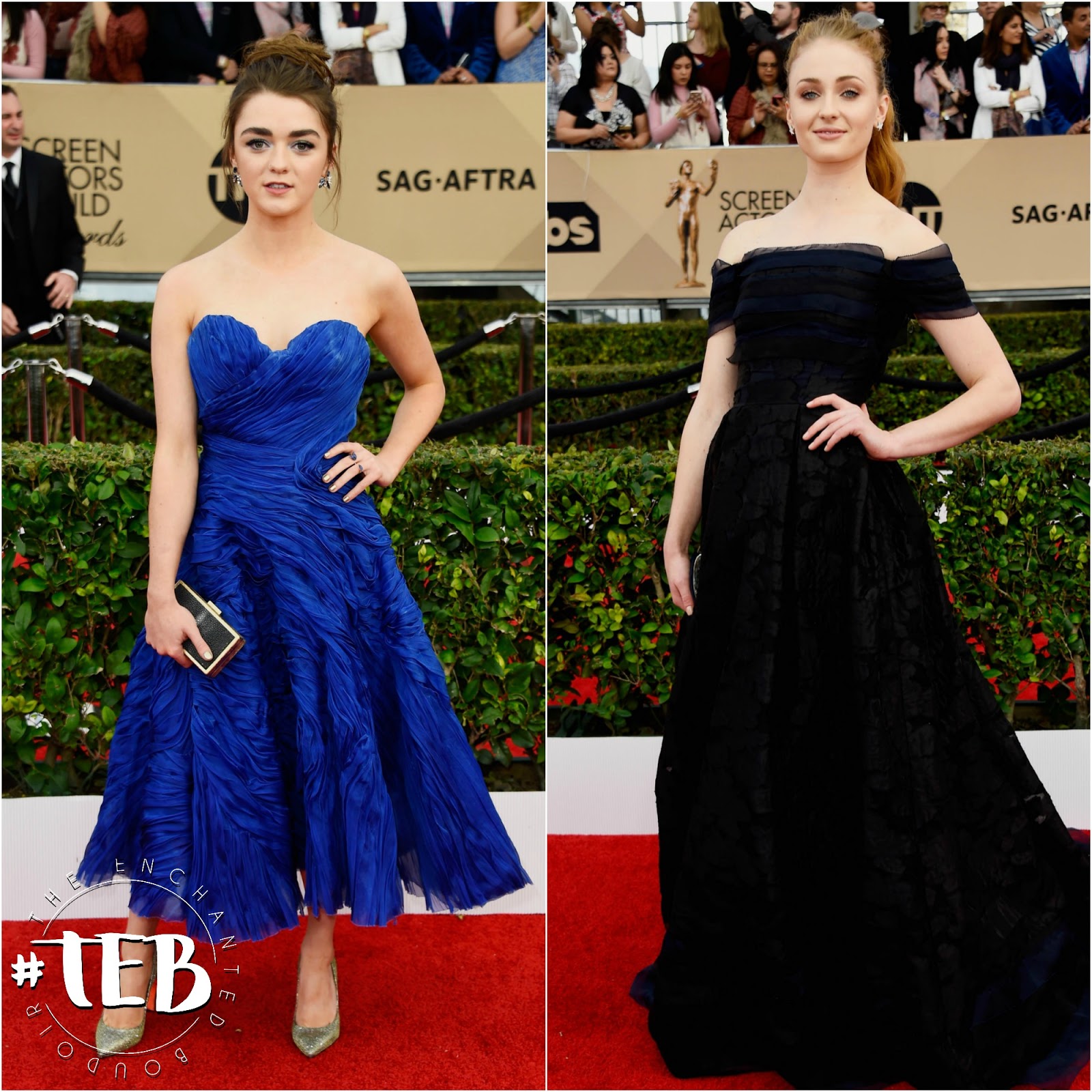 This time I am not really impressed by the fashion choices of the two British stars: they looked ready for prom rather than for the red carpet. Maisie Williams wore an Ermanno Scervino‘s dress, that in my opinion looked too heavy for her petit frame; Sophie Turner was lovely in Carolina Herrera, but she was not memorable. I am a “dress to impress” kind of person, so this is miss for me.
Ariel Winter (Modern Family) in Romona Keveza_Kiernan Shipka (Mad Men) in Erdem_Sarah Hyland (Modern Family) in J Mendel 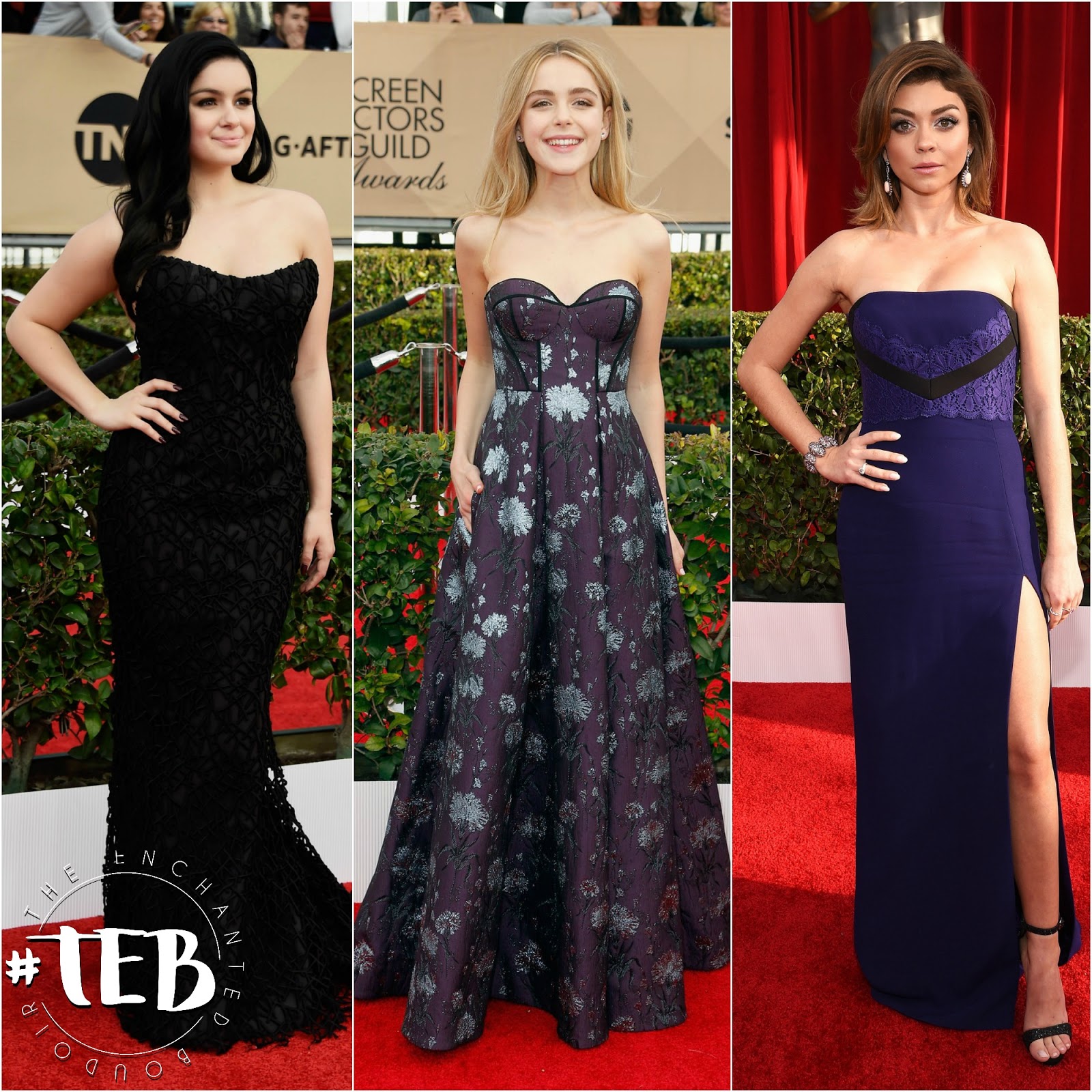 Keeping up with the young hollywood section we have Ariel Winter in a bombshell attire by Romona Keveza, Kiernan Shipka in a youthful and elegant Erdem design, and Sarah Hyland in a blue J Mendel. Kiernan looked the best, as it was easy to find some flaws in both Ariel and Sarah’s styling choises: Ariel’s frosty rose lipstick and Sarah’s poor hair style were definitely a total let down.
SPARKLING COUTURE
Julianne Moore in Givenchy Couture_Nicole Kidman in Gucci 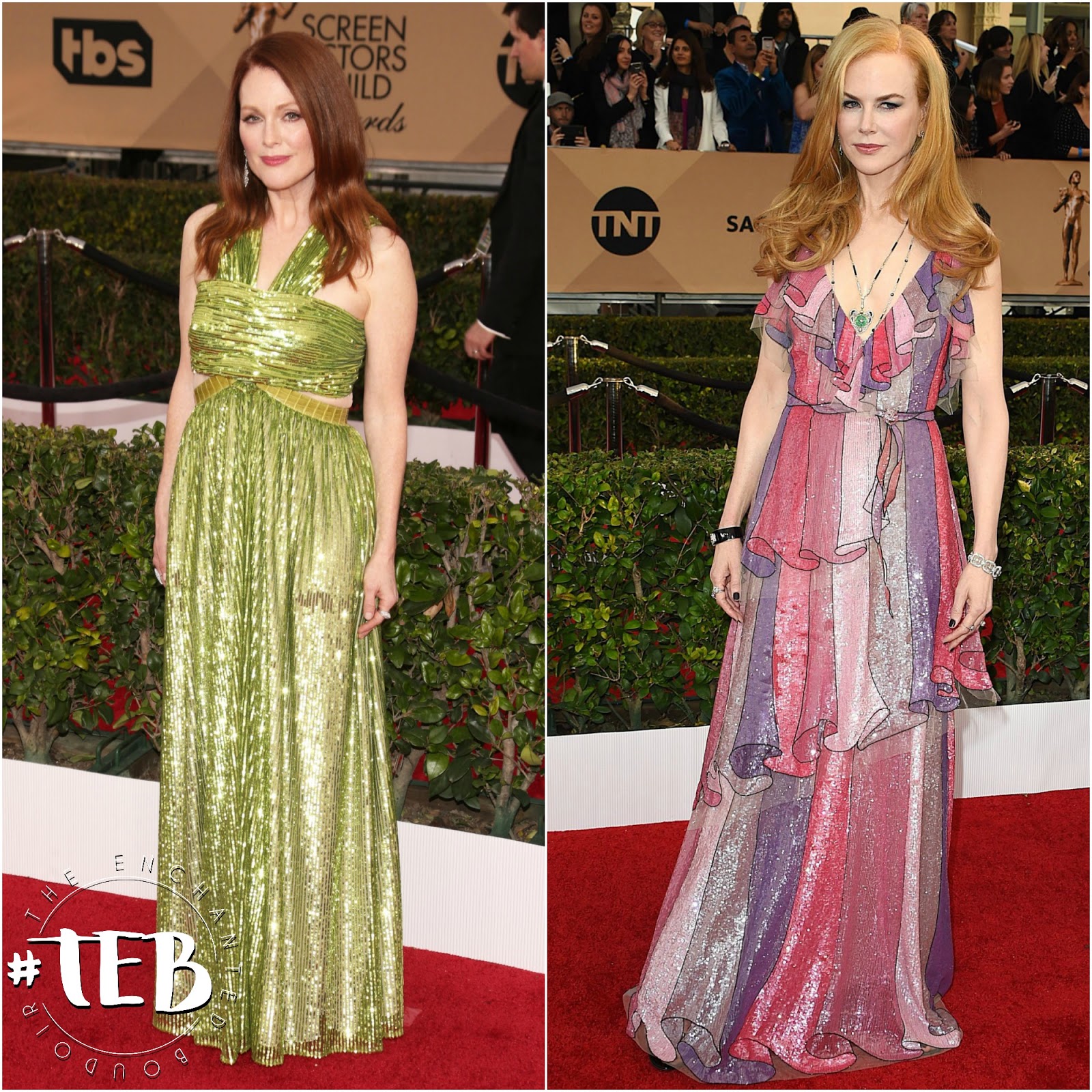 This is a hard one: two Hollywood royalties wearing the designs from two major fashion houses…and the result is not that good. Julianne Moore‘s lime green Givenchy dress was doing nothing for her body; however the color was beautiful on her. As for Nicole Kidman…well, that Gucci number was simply not made for her. Let’s start by saying that this is a tricky dress: I could see a younger celebrity rocking it and I can imagine a model wearing it for an editorial, but in my opinion this gown has no red carpet potential, and Nicole dear, that styling is not helping either.
CLASSIC ALLURE
Anna Faris (Mom) in Naeem Khan_Rachel McAdams (Spotlight) in Elie Saab_Marisa Tomei (Empire) in Zuhair Murad couture 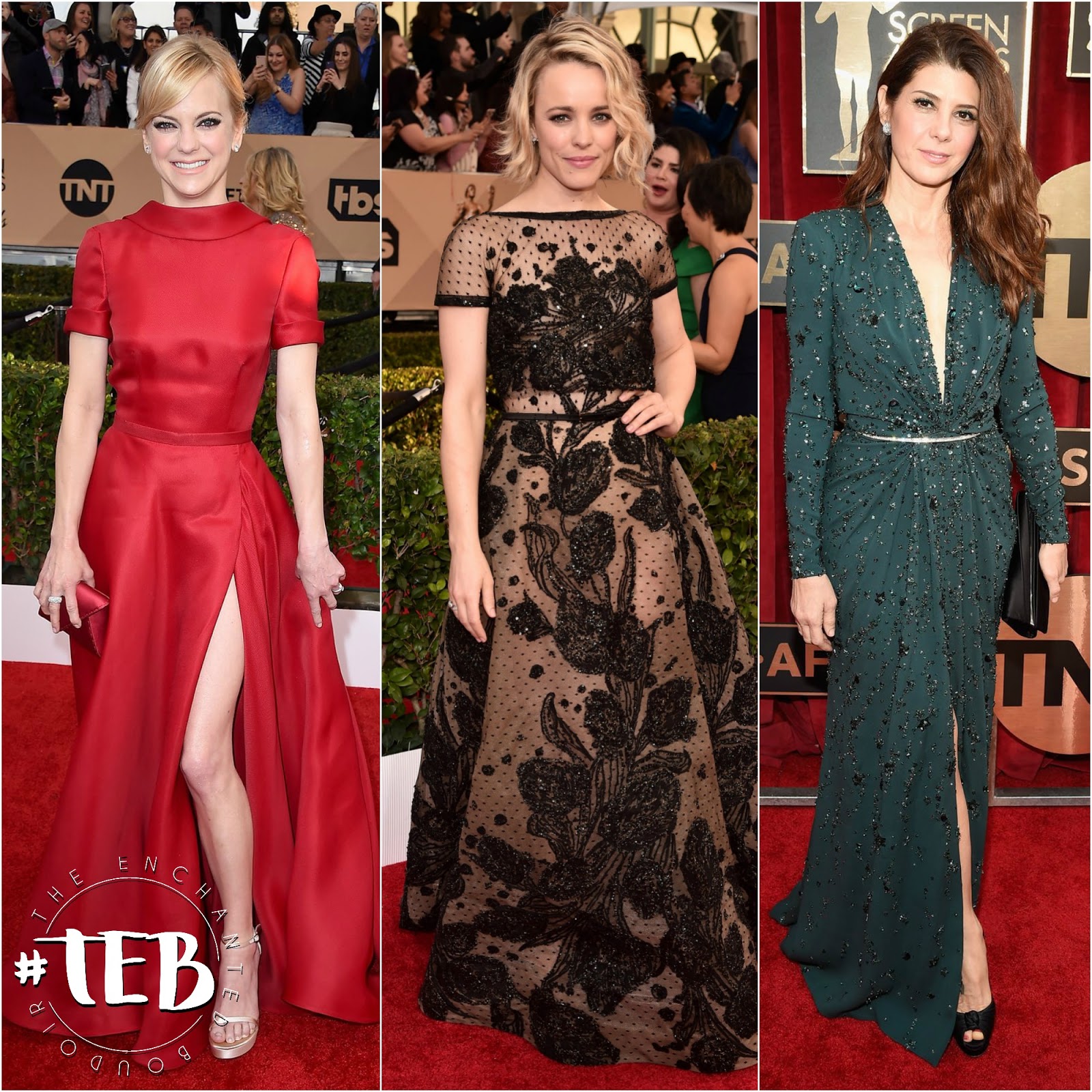 I see 3 beautiful dresses that needed a bit more of drama in the styling.
A red pout for Anna Faris and that gorgeous red Naeem Khan gown; a sleek hairstyle and a darker eyeshadow to upgrade Rachel McAdams in Elie Saab. Marisa Tomei disappointed me in the shoe-department and she definitely needed to pay more attention to her hairstyle, if she wanted to match that lovely teal Zuhair Murad.
NOT CONVINCING
Priyanka Chopra (Quantico) in Monique Lhuillier_Laverne Cox (Orange is the New Black) in Prabal Gurung_Eva Longoria (Telenovela) in Julien MacDonald 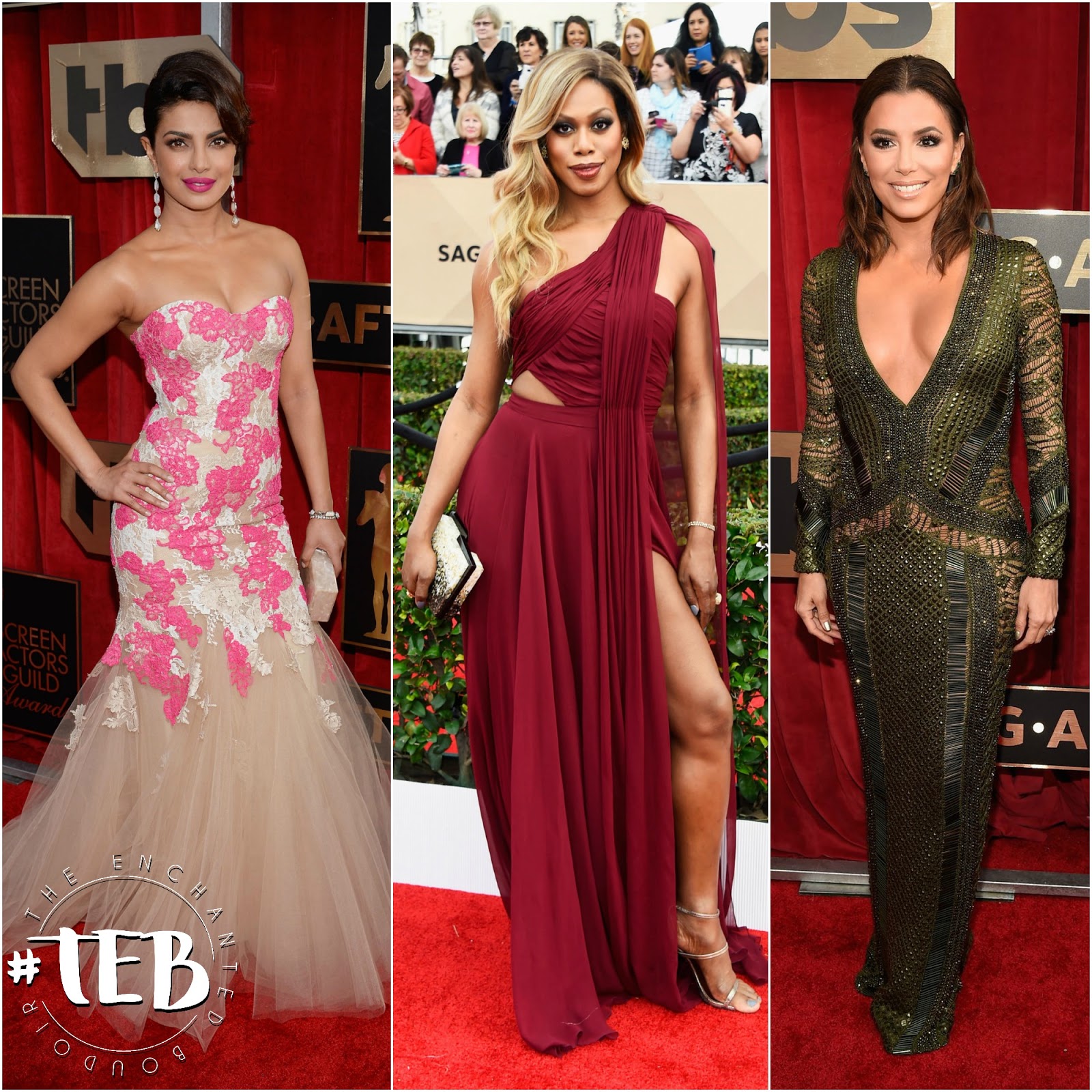 What do we have here? A bridal gown, a terrible pose and a hot mess. Wow, three beautiful ladies that did not manage to stand out in the crowd: Priyanka Chopra‘s Monique Lhuillier was a camouflage bridal gown; Laverne Cox was actually wearing a nice Prabal Gurung, but she killed off all the magic with that questionable pose; Eva Longoria  basically wore a dress that was meant for a taller person, and despite the fitting it is still very clear. BTW that hair style is a NO.
TOO MUCH FABRIC
Christina Hendricks (Mad Men) in Christian Siriano_Sola Bamis (Mad Men) in Lola Wusu 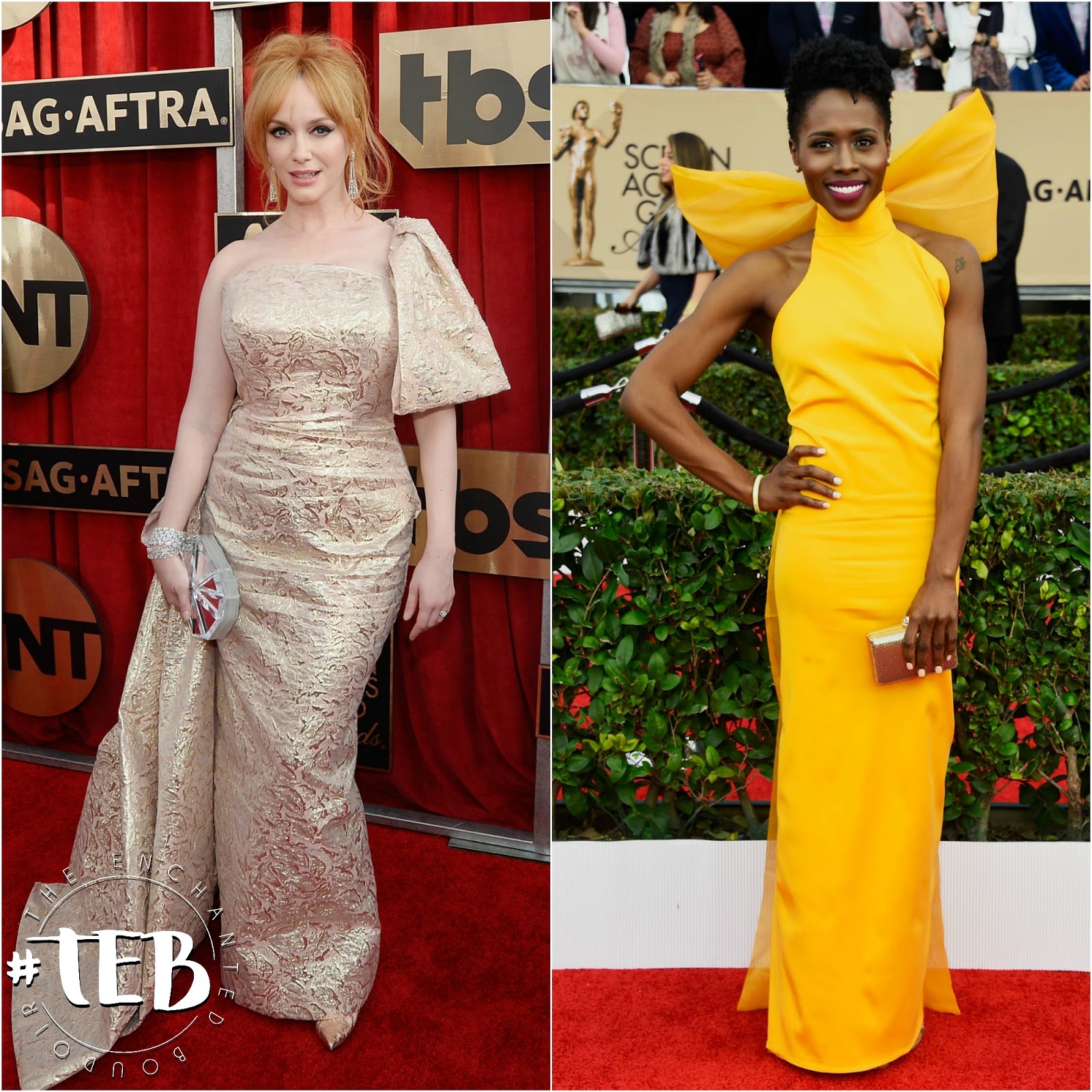 Usually I appreciate a bit of drama on the red carpet, but not in this case. One of the basic rules in fashion is to make sure that your client looks smoking hot in your design, and I dare you all to say that Christian Siriano or Lola Wusu accomplished that request. Sola Bamis should fire her stylist, while Christina Hendricks could have upgraded her dress with a pair of scissors: that piece of fabric on the shoulder was pointless. Chop it off next time!
SKIN SKIN SKIN
Susan Sarandon in Max Mara_Eva Amurri in Gabriela Cadena_Kaley Cuoco (The Big Bang Theory) in Romona Keveza 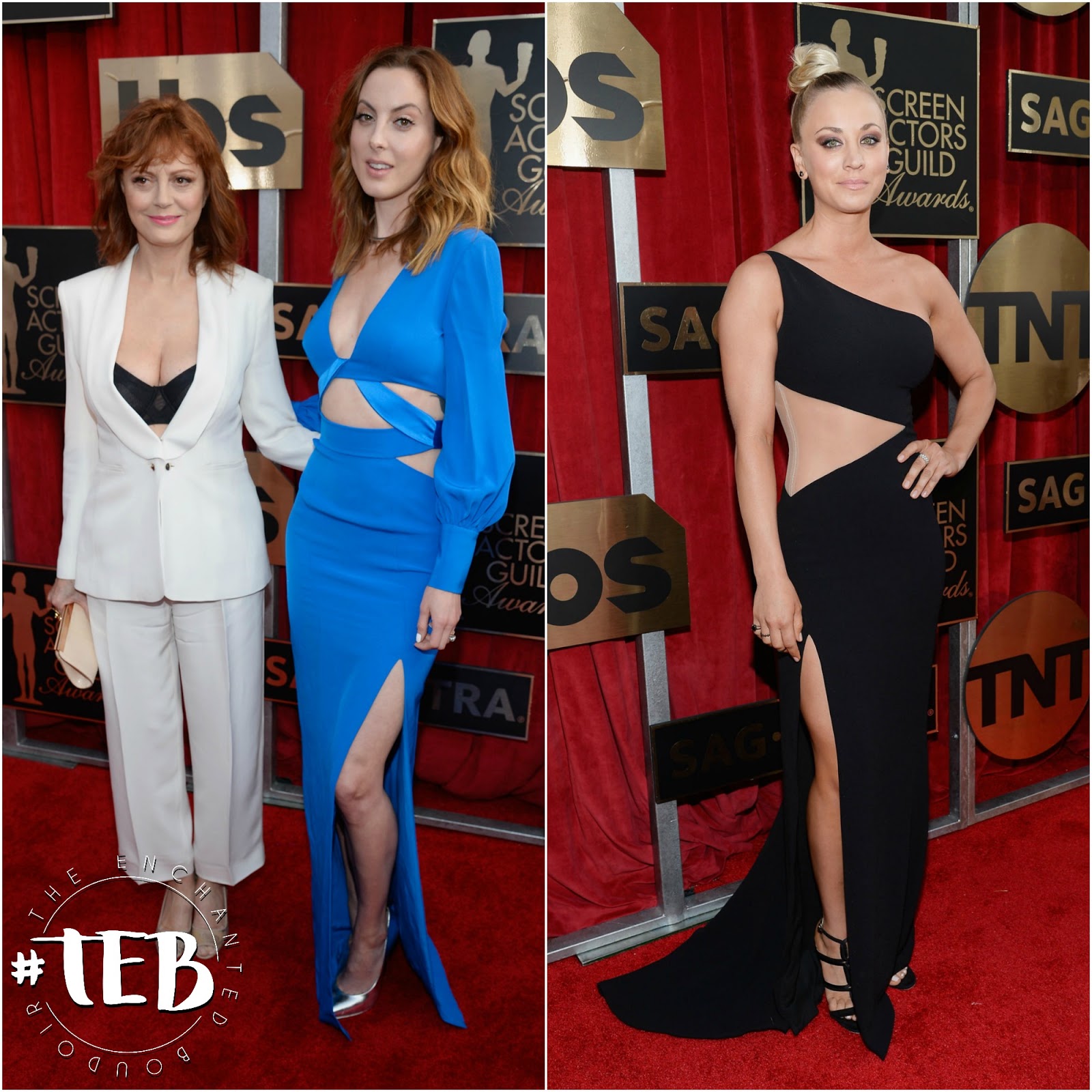 Where should I begin? Susan Sarandon should have worn a white corset under that Max Mara tuxedo, and those pants needed to reach the floor. I do not have much to say about the Gabriela Cadena dress that Eva Amurri wore, if not “burn it”. Kaley Cuoco dress could have been a good choice for the Grammys, but that sheer panel that does not match her skin-tone is a let down. Next.
Written by: Stella