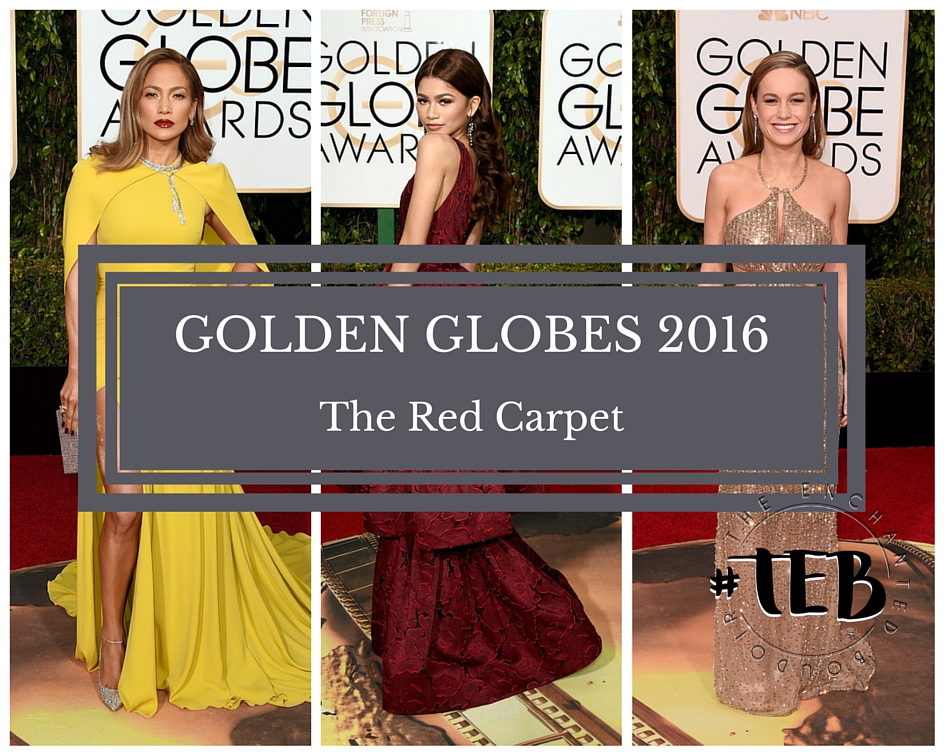 “Dress to impress”: this was the mantra of the 73rd annual Golden Globes Awards, which took place last night in LA.
The best movies & tv shows have been awarded, but who stole the show on the red carpet?
A delightful runway of stars in luxurious designer gowns: are you ready to see who made it (and who did not made it) to #TEB best dressed list?
Let’s start: 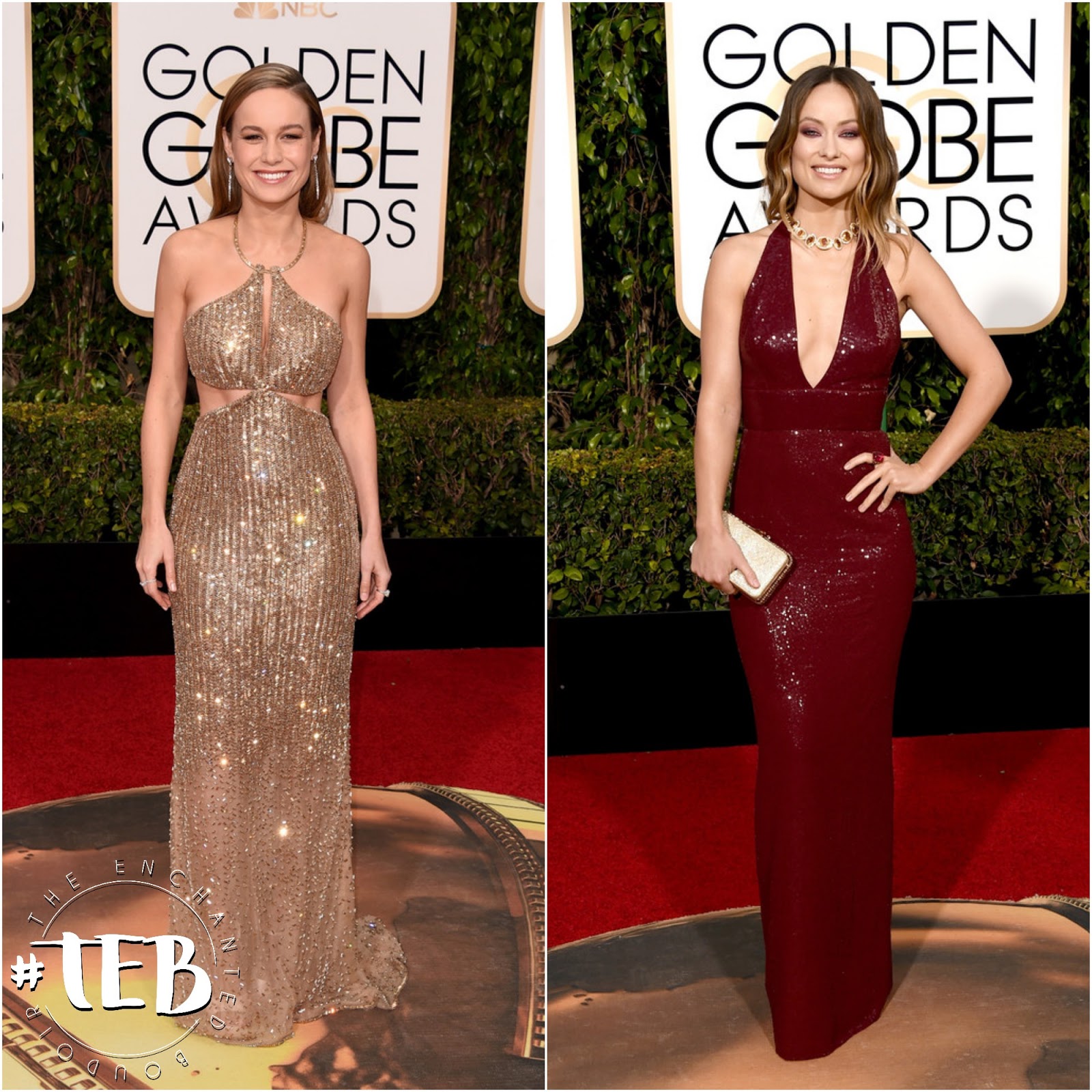 These two ladies stole my heart at first sight: simple shapes and dazzling details…well you have my attention!
Olivia Wilde channelled her inner bombshell selecting a beautiful burgundy Michael Kors design, while Brie Larson left everyone speachless wearing a golden Calvin Klein number, which looked even more appropriate when she walked on stage to receive the award for Best Actress Drama.
PERFECTION IS AN ATTITUDE
Zendaya in Marchesa_Cate Blanchett in Givenchy 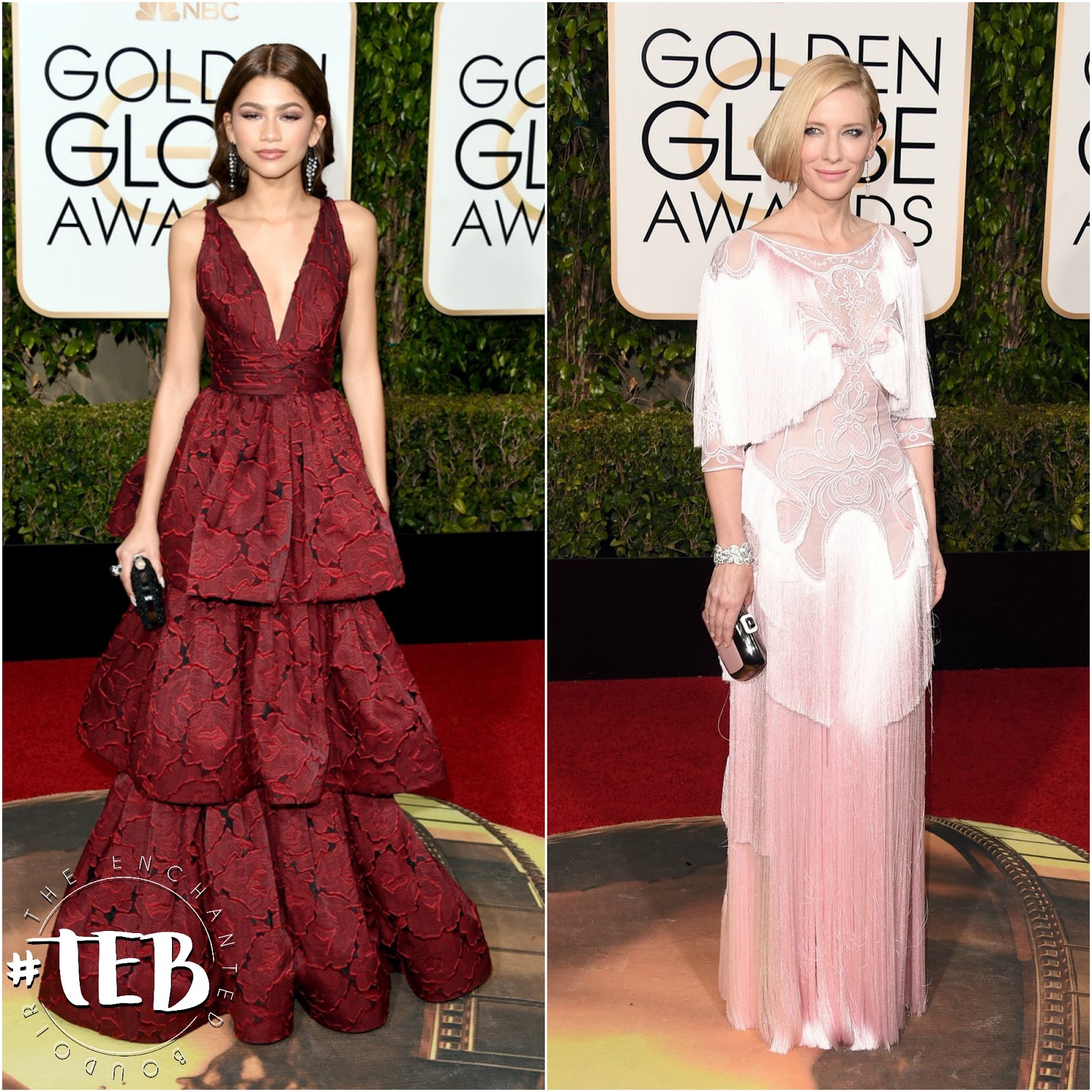 There is no way that Zendaya and Cate Balanchett could not made it to the best dressed list: you can bet your money on that.
The young fashionista debuted at the Globes wearing a romantic burgundy Marchesa gown; Carol‘s actress played the couture card instead, opting for an exquisite Givenchy design. 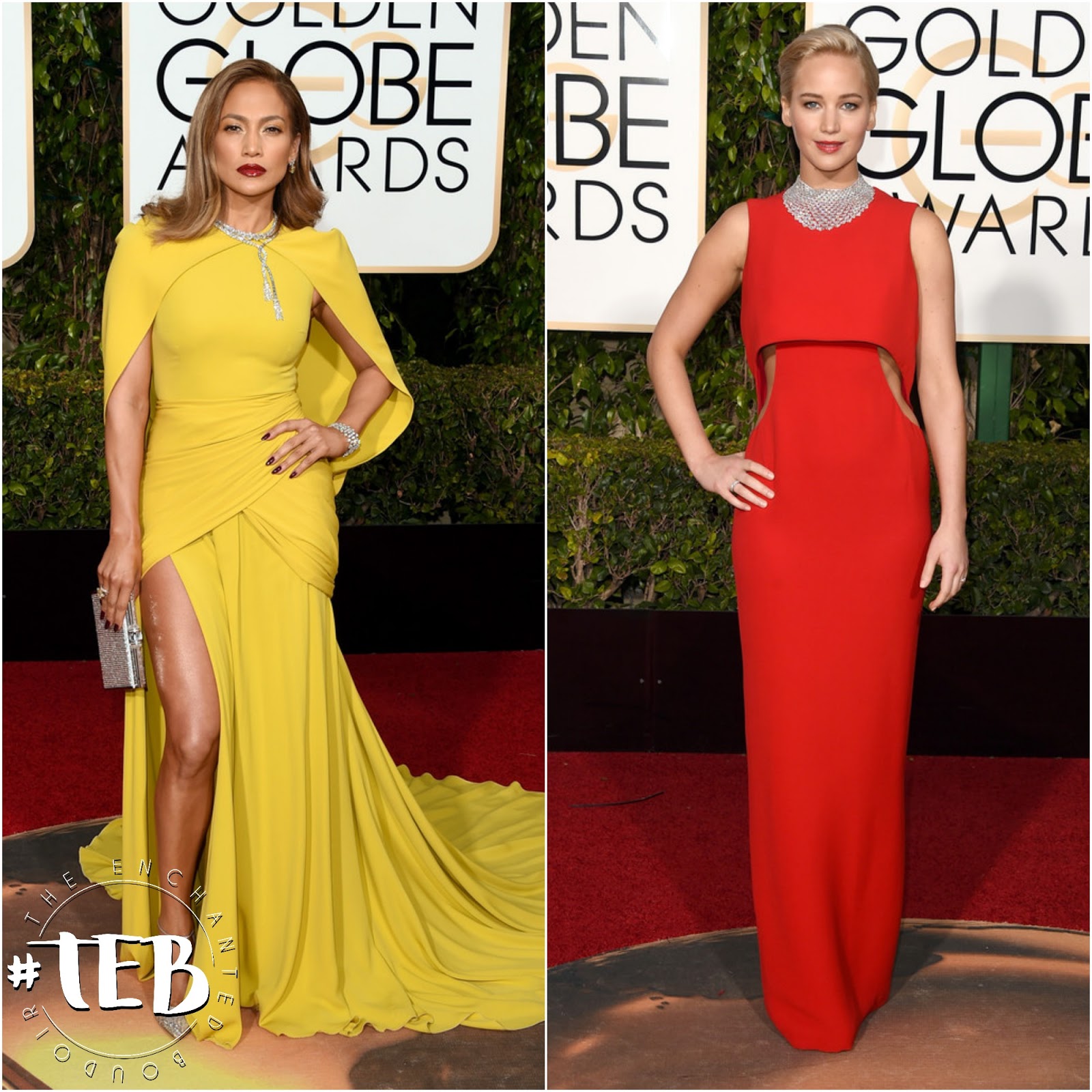 The world is definitely changing.
Jennifer Lawrence finally got it right in Dior, while JLo refuses revealing outfits to wear one of the most beautiful Valli dresses I have ever seen.
Ok I do not know what happened, but I love it: keep it up girls!
FAIRYTALE DREAM
Jenna Dewan in Zuhair Murad_Viola Davis in Marchesa 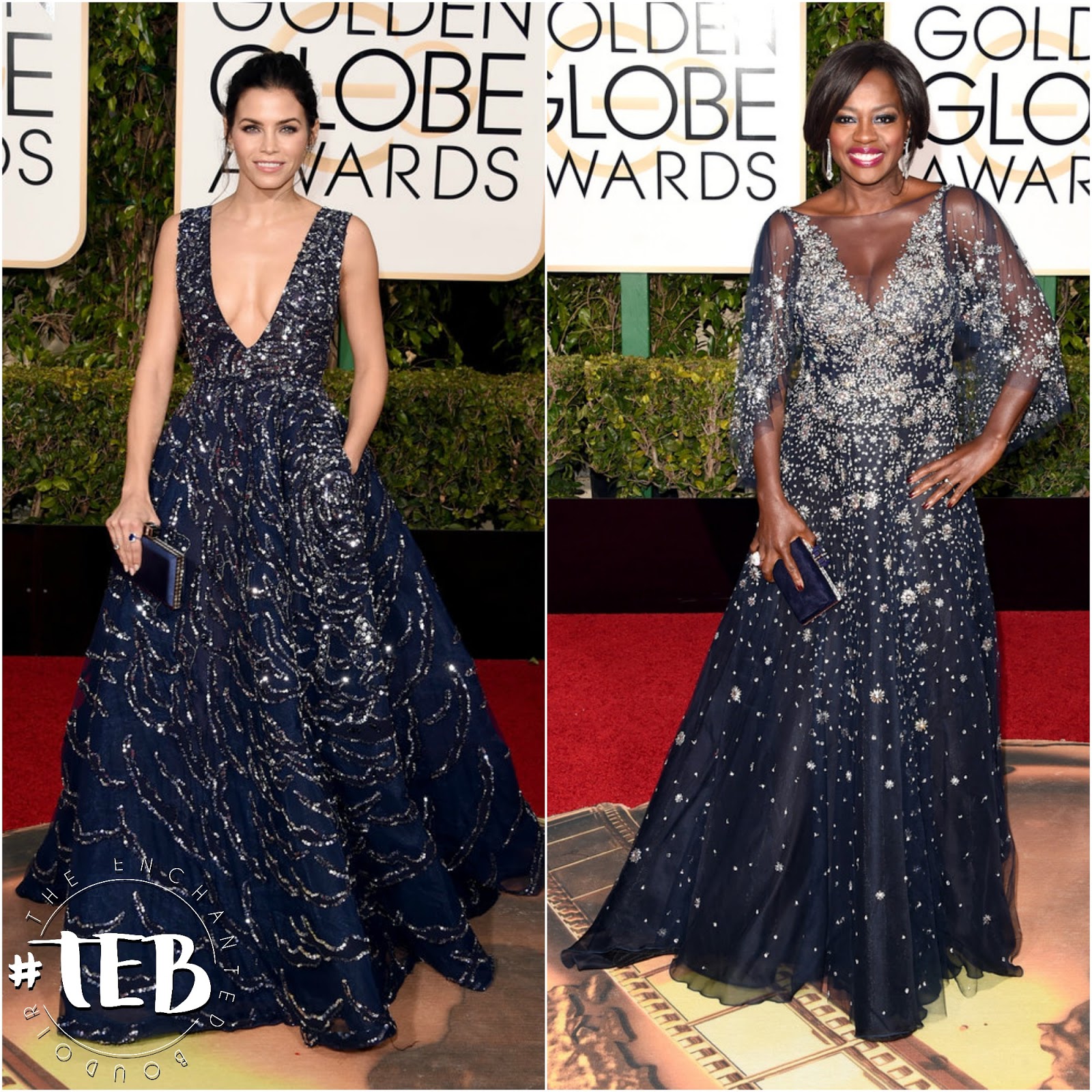 When your dress looks like a midnight sky, you have good chances to look like a star: congratulations to Jenna Dewan Tatum– and Viola Davis‘ stylists, who found the perfect design to enhance their clients’ natural beauty!
OFF WHITE
Saoirse Ronan in Yves Saint Laurent Couture_Alicia Vikander in Louis Vuitton_Lily James in Marchesa 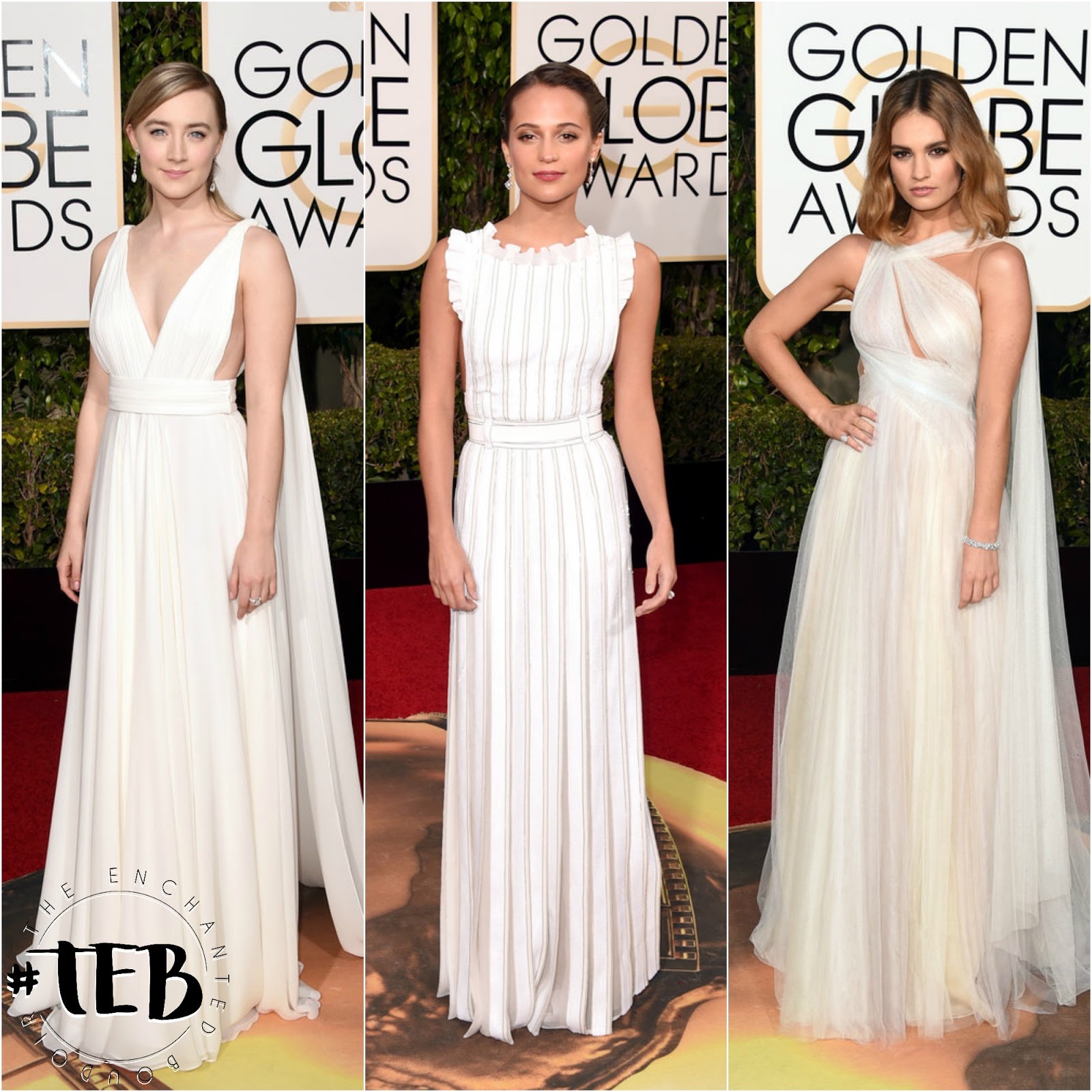 Pure white dressed became a trend last night: Saoirse Ronan, Alicia Vikander and Lily James managed to sell the trend to me in the blink of an eye…
Taraji P. Hanson (Best Actress in a TV Series_Empire) in Stella McCartney_Jane Fonda in Yves Saint Laurent Couture_Laverne Cox in Elizabeth Kennedy 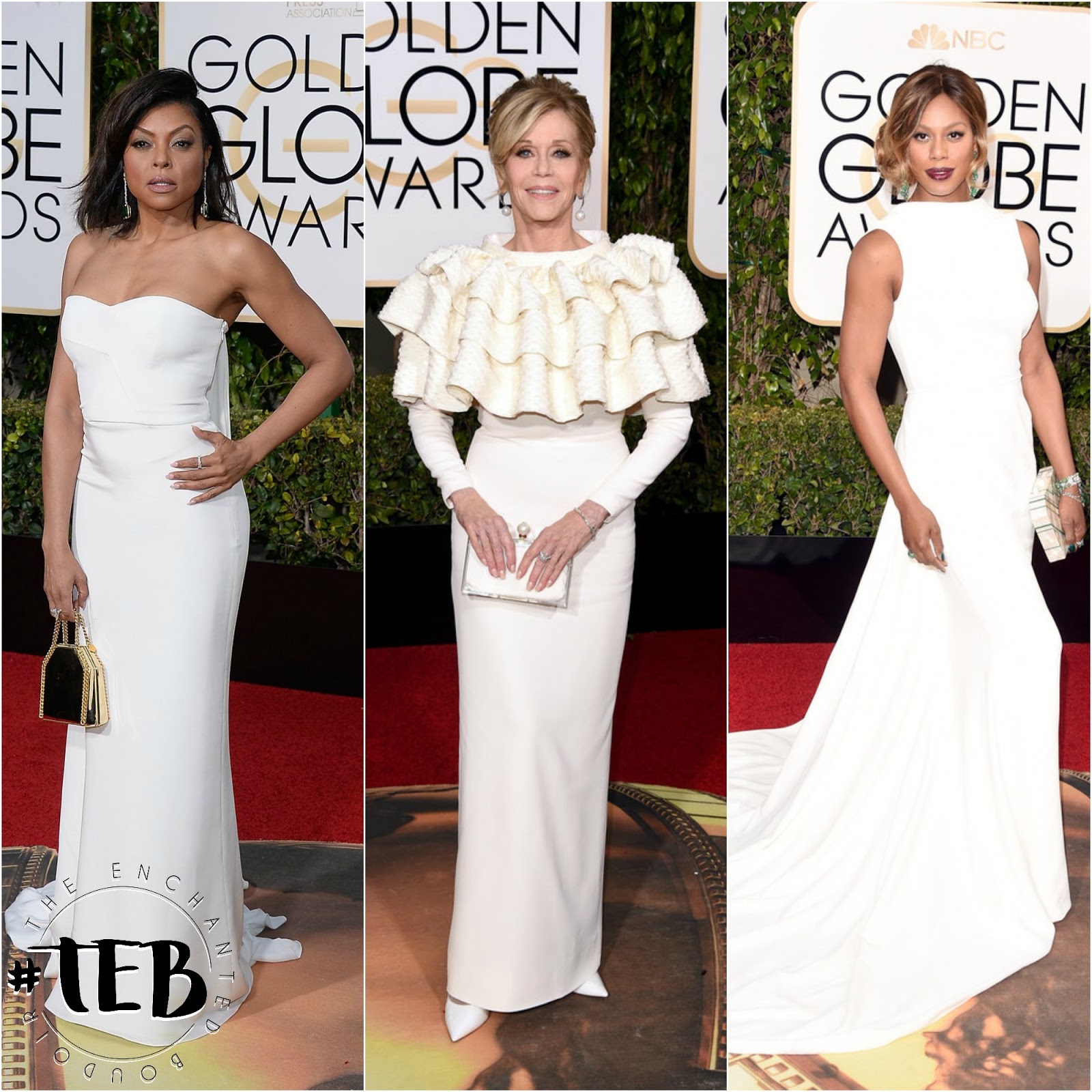 …while it took me a little bit more to be fully convinced by Taraji P. Hanson, Jane Fonda and Laverne Cox.
And here is why: Taraji’s dress and styling looked too simple, no wow factor; Jane Fonda’s choice seemed too heavy, while Laverne’s hairstyle felt a bit too classic.
However these three ladies got my permission to the best dressed list, as their class and personalities on the red carpet managed to cancel all my doubts.
CLASSIC IN BLACK
Lady Gaga (Best Actress in a Mini-series_American Horror Story: Hotel) in Atelier Versace_Kirsten Dunst in Valentino 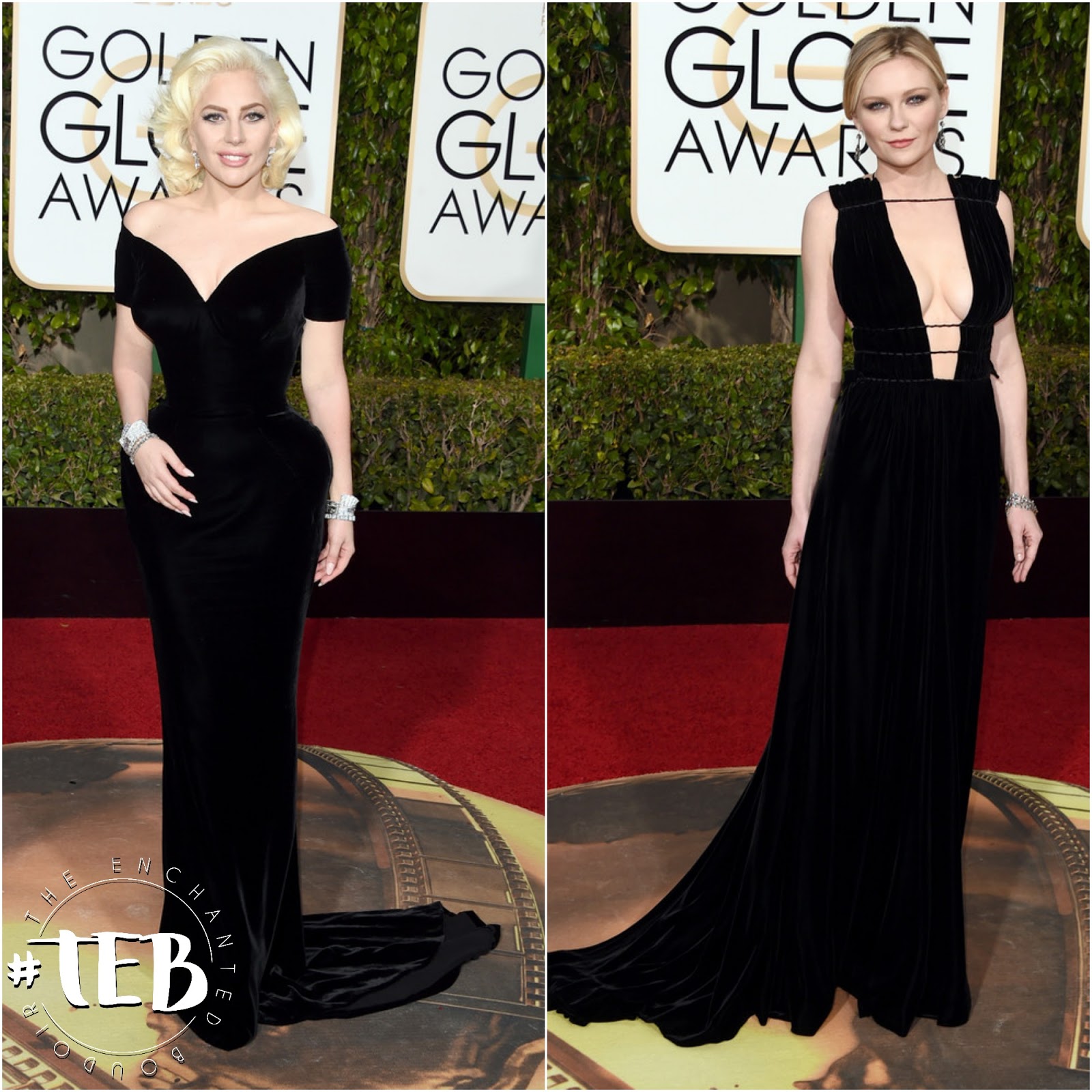 Going against the flow but looking undeniably beautiful, Lady Gaga (who went home with a golden globe for her performance in ASH: Hotel) and Kirsten Dunst.
An alluring monochromatic compromise between elegance and sensuality: WOW!
SPARKLING NUMBERS
Kate Bosworth in Dolce & Gabbana_Julianne Moore in Tom Ford 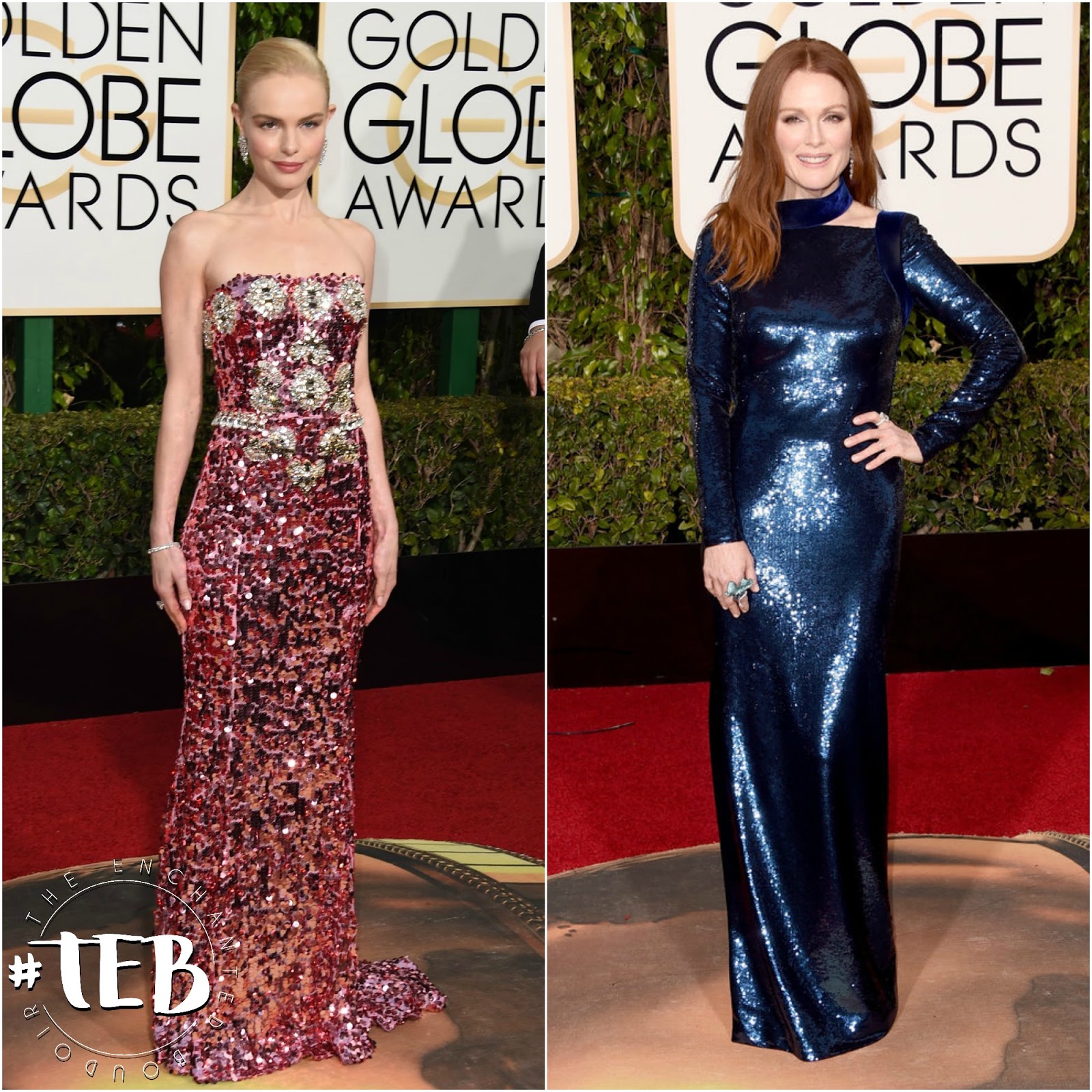 If I have to pick an adjective I would never associate with a sequin dress, that would be “boring”. Unfortunately for Kate Bosworth and Julianne Moore this was the word that come to my mind when I first saw them: nice designs, but no spark.
OK
Amy Adams in Versace_Jada Smith in Versace_Heidi Klum in Marchesa 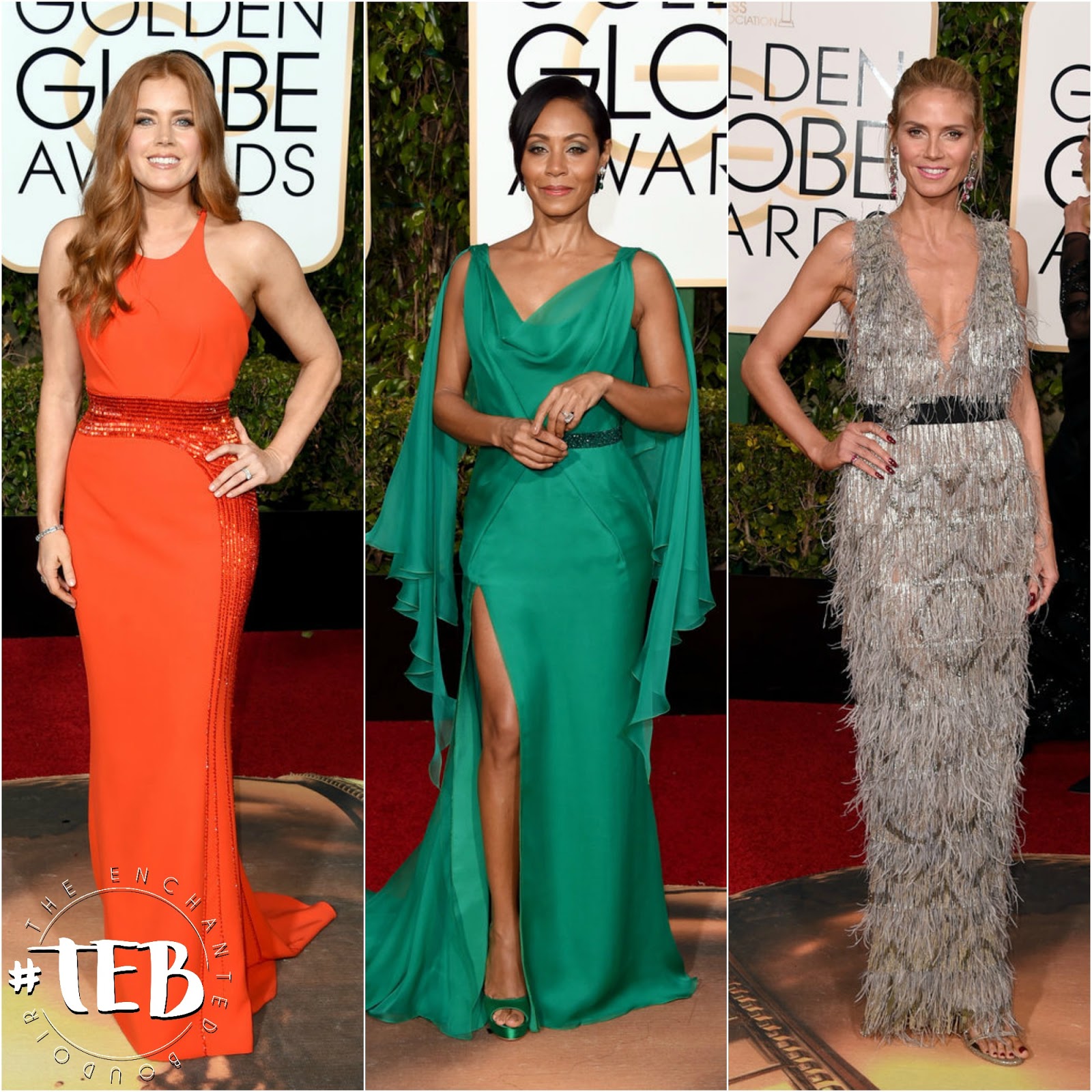 Good choices, just not memorable.
However I have to admit that I loved the bold colors of Amy Adams– and Jada Smith‘s Versasce gowns. Moving to Heidi Klum, well she looked nice, but among all the beautiful Marchesa designs we saw last night, this was not a show-stopper. 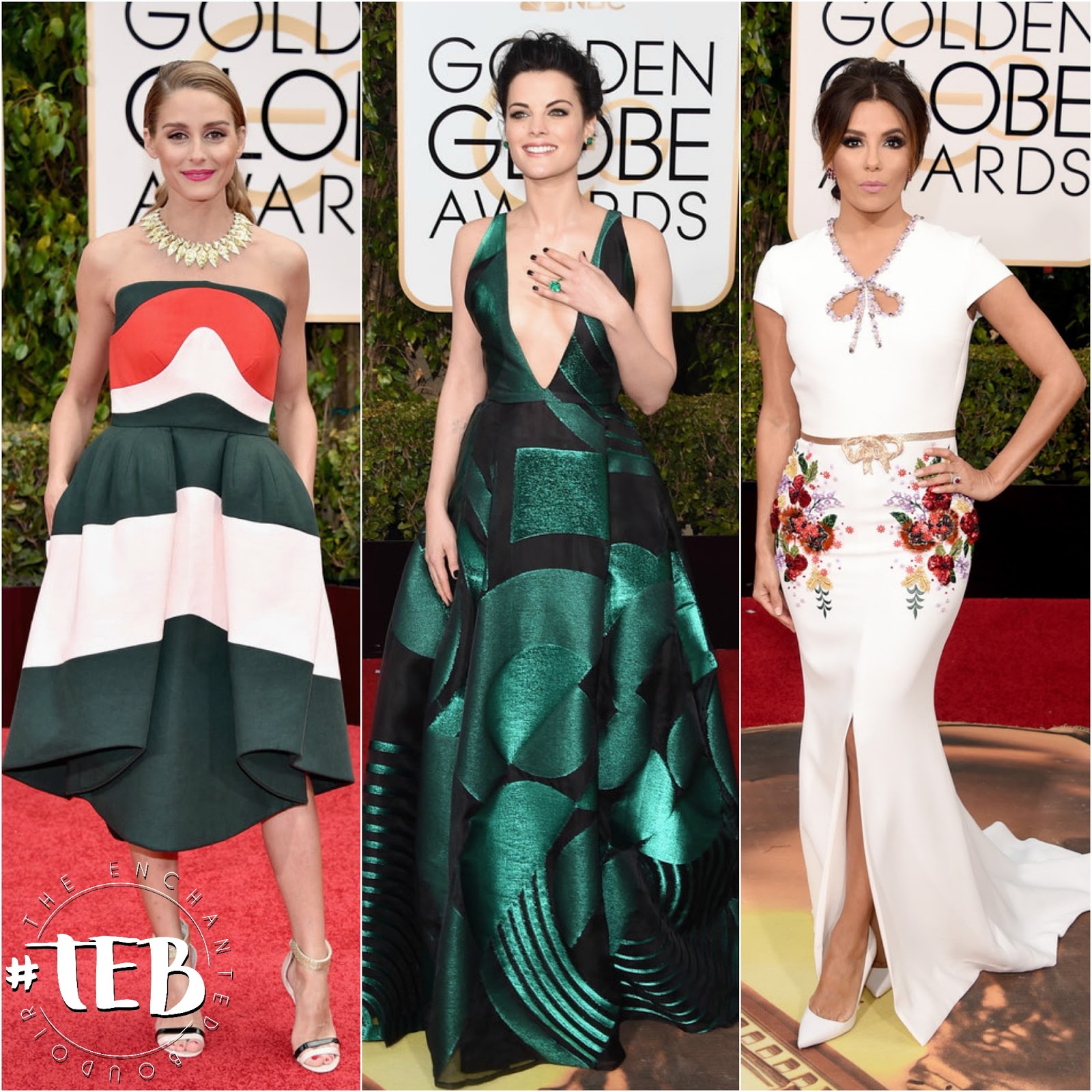 Featured in the “Ok” category also Olivia Palermo, who actually looked amazing, but that dress was more suitable for the after party.
Jamie Alexander‘s daring gown and Eva Longoria‘s romatic choice proved to be worthy of the red carpet, but their hairstyle prevented me from fully love their looks.

This is a hard one: the best dressed top model of 2015 failed to amaze me at a major event.
Rosie Huntington-Whiteley is a natural stunner, but this time her beauty saved the dress: I truly expect more from her.
I was expecting more also from Rooney Mara, whose edgy style always compell me; however this McQueen gown only managed to  wash her out completely.
Emilia Clarke in Valentino_Eva Green in Elie Saab_Emmy Rossum in Armani Privé 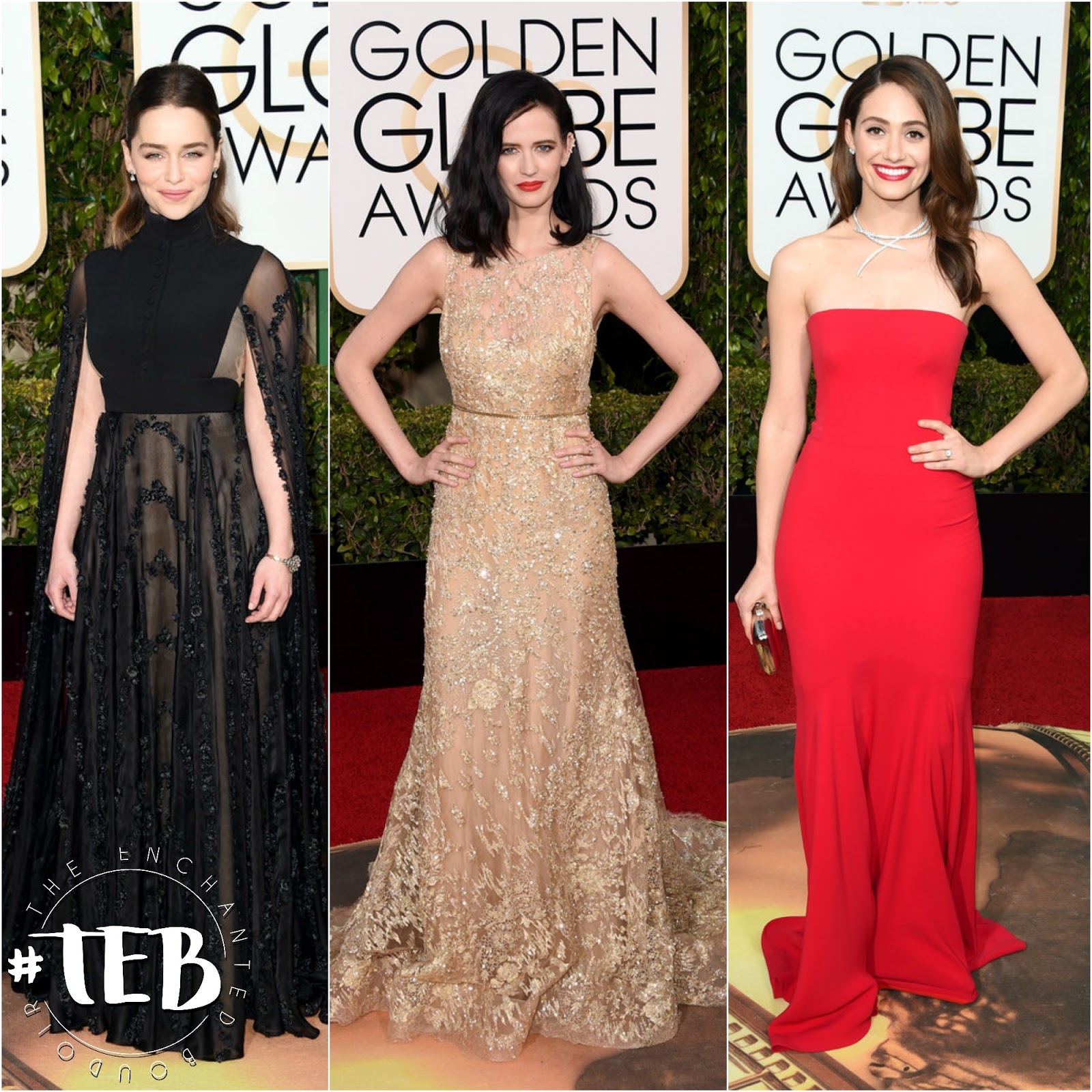 Underwhelming choices for Game of Thrones, Penny Dreadful and Shameless stars as well.
Personally I would have given Emilia Clarke‘s Valentino gown to Eva Green, Emmy Rossum‘s hot Armani Privé dress to Emilia, and Eva’s golden Elie Saab to Emmy.
Complicated? Yes, but it would have looked far better.
Well guys, here we are:
#TEB’s least favourite looks from the 2016 Golden Globes Awards belong to…
Kate Hudson in Michael Kors & Katy Perry in Prada 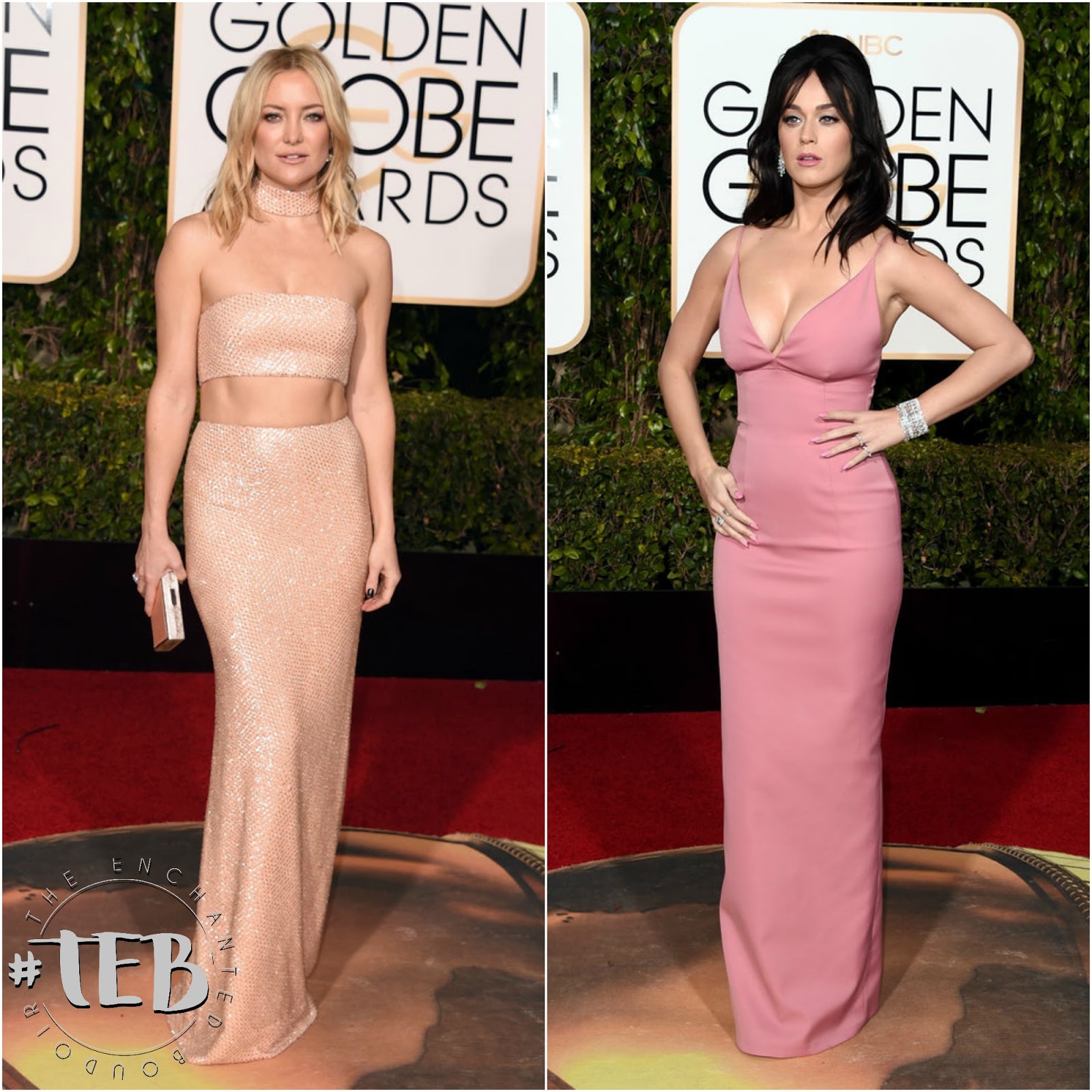 I am so shocked to feature Kate Hudson here, as much as I am not surprised by Katy Perry‘s poor styling choice.
Actually the dresses were fine, but:
-dear Kate, we are at the Golden Globes not the Grammys (BTW fire your stylist);
-and Katy…actually even Miss Piggy has a better hairstylist.
Written by: Stella