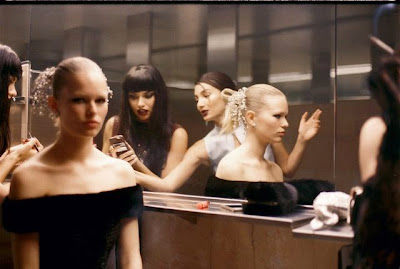 Let’s start with a couple of selfies taken by Adriana Lima, at this week’s biggest event: the Met Gala (see all the models’ looks here). She posed with the fellow Victoria’s Secret Angels Candice Swanepoel and Lily Aldridge, and later with the pop star Rihanna.
Miranda Kerr was at the Met Gala too, and she was definitely hungry after it!
Cristiano Ronaldo ex girfriend, Irina Shayk, who is rumored to be dating the actor Bradley Cooper, couldn’t miss the Met Gala either. Not enough?! Later this week, she attended the Pronovias fashion show in Barcelona (video), which she opened and closed. Pronovias fashion show is the biggest event of the year in the wedding fashion industry. Before the show, she posted this gorgeous picture.
#itshardbeingIrinaShayk
Of course Irina was’t the only model at the Pronovias show: Blanca Padilla and Cindy Bruna walked the show as well.
#legs
From Irina Shayk to… Shanina Shaik, but always talking about ex boyfriends and new boyfriends.
Last Saturday night, Shanina attended the Manny Pacquiao Vs Floyd Mayweather fight in Vegas (won by the latter, to the disappointment of Adriana Lima), and earlier that day she had partied by the pool with Justin Bieber (video).
Obviously, she was then insulted by a few milions beliebers, but this made us actually think about Shanina’s (ex) boyfriend: the model Tyson Backford. The two haven’t been spotted together since January, when they went to Jamaica. Shanina has even cancelled the photos of that holiday from Instagram. Have they broken up??
Shanina wore a very sexy suimsuit at the pool party in Las Vegas.
Ok let’s stop overthinking about boyfriends and ex boyfriends now, and let’s focus on the suggestions of Izabel Goulart (and that motivational wall):
Maria Borges was at the Clio Image Awards and she looked beautiful in a Moschino dress. Jourdan Dunn was there too.
L’Oreal is the official make up designer of the Cannes Film Festival, which is starting on the 13th of May. The Enchanted Boudoir will keep you updated on the best and worst dressed, as we have done in the past years. L’Oreal is going to bring these beauties on the festival’s red carpet: Lara Stone, Liya Kebede, Karlie Kloss, Doutzen Kroes, Barbara Palvin and Natasha Poly.
We can’t wait to see what they will wear. Stay tuned!