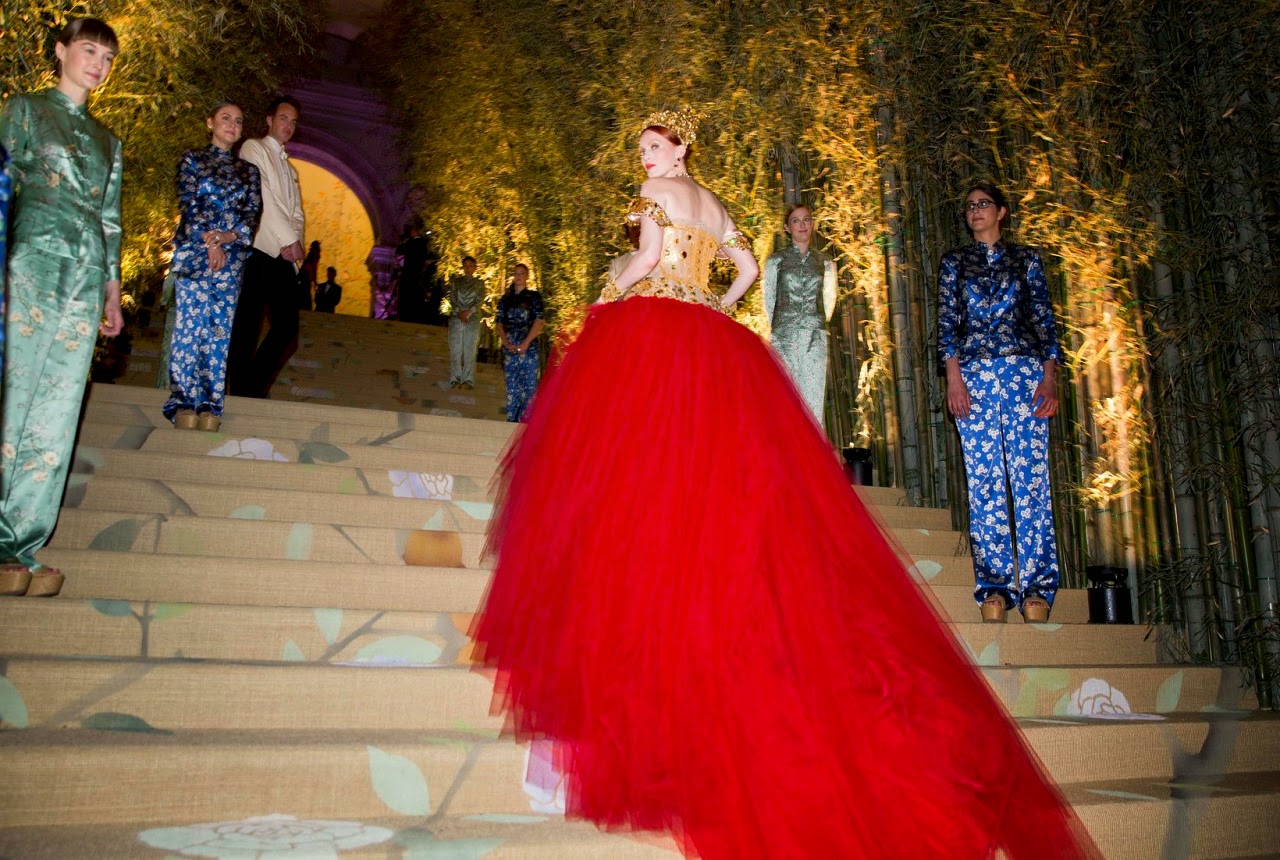 Quest’anno il MET ha voluto onorare l’influenza della cultura cinese nella moda, grazie ad un’esclusiva mostra dal titolo “China: Through The Looking Glass”. Agli invitati è stato dunque richiesto di vestirsi a tema, ma non tutti sono stati in grado di rispettare la consegna…
Abbiamo già commentato i look delle celebrità, ora è il momento di dare un’occhiata a quello che hanno indossato le modelle.
This year, the MET paid homage to the Chinese cultural influence in fashion, thanks to an exclusive exhibition: “China: Through The Looking Glass”.
The guests were asked to dress according to the theme, but not everyone was able to respect the assigment…
We have already reviewed the celebrities’ outfits, now it’s time to have a look at what the models wore.
Iniziamo dalle modelle che hanno reso giustizia al tema:
Let’s start with the models who did this theme justice:
ELEGANCE
Karolina Kurkova in Tommy Hilfiger.
Giuseppe Zanotti shoes Judith Leiber clutch, Fred Leighton jewelry.
It’s hard to believe that this is a custom made dress by Tommy Hilfiger. Anyways it was one of the best of the whole event. The Giuseppe Zanotti heels are just perfect to complete this look. Lily Aldridge in Carolina Herrera.
Brian Atwood shoes, Judith Leiber clutch (as seen on Blake Lively), Stephen Russel jewelry.
No one can compete with Lily when it comes to elegance, and this look is another proof of that. The dress, the hair, the make up and accessories embody perfectly the essence of the event. Jessica Hart in Valentino Couture.
Charlotte Olympia shoes and clutch, Sutra Jewels and Carrera Y Carrera jewelry.
I’m glad that Jessica attended the Gala, because this look is one of the top three of the evening. These are the elegant transparences we want to see at the Met Ball (please Beyonce, JLo and Kim take note!). The hair bun is the cherry on top. SILK, EMBROIDERY AND FLOWERS
Emily Ratajkowski in Topshop.
Brian Atwood shoes, Rauwolf clutch, Effy jewelry.
Who would have guessed that this is a Topshop dress? Emily keeped it classy and killed it! Bella Hadid and Hailey Balwin in Topshop.
Other two models were chosen by Topshop to wear Chinese inspired gowns, but they got different results: Bella styled her dress way better, thanks to the good hair style choice and shoes. Irina Shayk in Ateleier Versace.
We all agree that the russian model is stunning, but she lacks a bit of fashion sense. This look is clear example of that, but we’ll give her a pass, because she tried to respect the theme. Georgia May Jagger in Gucci (by the new director Alessandro Michele).
Maybe this Gucci silk gown with asian inspired birds and flowers decoration is too costumy, but, same as the Gucci shoes and headpiece, it’s right and proper fot the theme. SAVED BY THE MODEL AND THE STYLING
Adriana Lima in Marc Jacobs.
Judith Leiber clutch, Chopard jewelry.
The dress is quite boring and it doesn’t do justice to Adriana’s body, but the Victoria’s Secret angel saved the look thanks to her stunning make up. Rosie Huntington-Whiteley in Atlerier Versace.
Christian Louboutin shoes, Anita Ko jewelry.
Rosie is one of the few people who managed not to look cheap in a Versace dress. I actually prefer the back of it, as it seems to follow the body more naturally. The hair style and make up were crucial for adding Chinese vibes to this look. Naomi Campbell in Burberry.
This is a nice dress, but it’s definitely Naomi, who makes the difference. Jourdan Dunn in Burberry.
I can clearly see the inspiration and the beautiful details of this custom made dress, but I don’t think it would have worked on anyone else than Jourdan. Joan Smalls in Roberto Cavalli (by the new creative director Peter Dundas).
As much as I love Peter Dundas (let’s just think about his work for Emilio Pucci) and as much as I love Joan Smalls, there is still something that doesn’t convince me about this dress. Anyways the styling is interesting and Joan looks good. Behati Prinsloo in Tommy Hilfiger.
Judith Leiber clutch.
The dress is really nice and so is the styling, but models should take more risks at the Met Ball if they want to impress and be remembered. This look reminds of the Chinese culture, but it’s not memorable. Karen Elson in Dolce & Gabbana.
I have mixed feelings towards this look: on one hand, it comes from a Dolce & Gabbana collection which was inspired to the bizantine art in Sicily, therefore is has nothing to do with the Chinese culture; on the other hand I think that it kind of works somehow, and it’s exactly the kind of gown you can wear at the Met Ball. DEGRADED BY THE MODEL AND THE STYLING
Kendall Jenner in Calvin Klein Collection.
This crystals embellished dress is stunning and the jade green colour and lace up sides have Chinese influence: all the elements to be among the best dresses of the night were there, but one. There is no styling at all in this look: nude make up and no jewelry. Ok, Kendall wore a pair of Choapard earrings, but you can’t notice them, because she went to the Met Gala with her everyday make up and loose hair, otherwise she wouldn’t have looked pretty enough… Maybe this is because she hasn’t got those foundamental characteristics for a model: versatility and interesting face features. She looks beautiful, but a real model would have looked breathtaking. SHOULD HAVE DONE BETTER
Cara Delevingne in Stella McCartney.
Stella is one of he designers I admire the most, but this look let me down: the playsuit looks like a fitness playsuit of the 1990s and I don’t understand the gross bra underneath it. It also seems like it runs small to Cara. But most of all, this look has nothing to do with the Chinese culture, except from the painted tattoes with the birds and flowers motif. I guess they spent a lot of time to drawing them, so maybe a strapless top would have been a better option to focalise the attention on the tattoes. Constace Jablonski in Theory.
I love these coordinated trousers and top of Chinese style. I also appreciate the attenction for details, from the nail polish to the matching ring and pochette. But I can’t forgive the flat slippers and the absence of hair styling. This look was interesting and different from the others, but it should have been styled better. MOST BORING AWARD
Candice Swanepoel in Michael Kors.
Barely there. I’m not talking about the nude dress, but about Candice: I don’t think that someone has noticed her at the Met Ball, between all those fabulous gowns. The dress she wore was boring and it’s a copy of the dress she wore at the last Victoria’s Secret afterparty. Gigi Hadid in Diane Von Furstenberg.
Christian Louboutin shoes, Lorraine Schwartz jewelry.
Let’s pretend for a second that you are a 20 year-old stunning model, your career is getting better and better, everybody is talking about you and you are invited for the first time at the biggest fashion Gala of the year… Would you wear this dress? No one will even remember that you were there. Miranda Kerr in Louis Vuitton.
Giuseppe Zanotti shoes, Lorraine Schwartz jewelry.
Has anyone told Miranda that she was at the Met Gala? She dresses more elegant when she takes her son to the park. TOPSHOP SUPERMODELS
Lily Donaldson, Maryna Linchuk and Natasha Poly in Topshop.
I just want to apologize to Lily, Maryna and Natasha for having their names written in the same Topshop invitation as Hailey Baldwin. Someday someone will also explain to me why they couldn’t give Lily a decent dress. Maryna’s dress is just slightly better, while Natasha’s one is really nice and in theme.